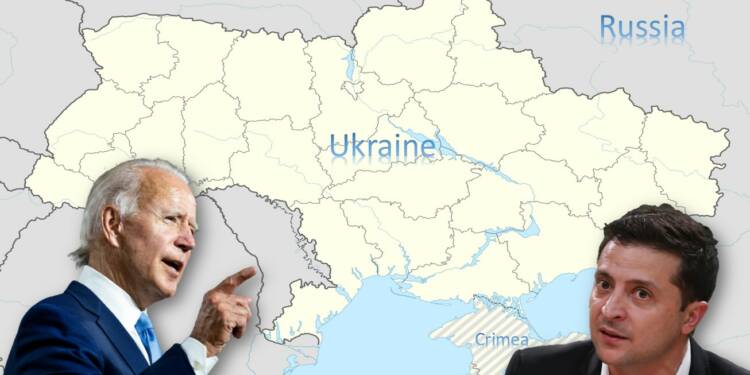 The Ukraine and Russia border has, for the past few weeks, remained an area of concern for the world. There lies a possibility of conflict and escalation between the two countries, but the situation is much more complex as well as simple than what the western media and the statements of the political leaders show. The geopolitical situation of the region doesn’t need warmongers and instigators, but rather needs peacemakers and solution providers.

On one side, there’s Russia, a military superpower, and on the other side, there’s a small country of Ukraine, with zero chance of winning a war with Russia. What’s interesting is that there’s also a third party, the warmonger and instigator Biden administration.

In his recent press conference, President Volodymyr Zelensky interacted with the media and disclosed the details about his controversial phone conversation with President Biden on Thursday night.

He said, “I mentioned this to President Biden … we need to stabilize the economy of our country because of those signals which say that tomorrow there will be war”. He added, “Because these signals were sent by even leaders of the respected countries, sometimes they are not even using diplomatic language! They are saying – Tomorrow is the war”. “This means panic on the market, panic in the financial sector … how much does it cost to our country?” Zelensky asked.

Describing his conversation with Biden, Zelensky said that he emphasized to Biden that telling the world that Russia would immediately invade Ukraine is something that Ukraine has many times stated to be a claim that has little material evidence to believe. He also said to Biden that statements like this could create a huge loss to the Ukraine economy and may lead to an actual Russian invasion.

Addressing the media, Zelensky condemned the international and western corporate media along with the world leaders like Joe Biden for their reports and statements. He condemned them for publicly predicting an imminent war between Ukraine and Russia. He also said that because of these statements and media reports, Ukraine, in the past few weeks, has suffered a loss of 12.5 billion hryvnias (about $437 million) in foreign investments.

Read More: Three possible scenarios if military escalation goes out of control on the Ukraine-Russia border

The reason behind Ukrainian President Condemnation

The recent statements of US president Joe Biden and the officials of his administration have clearly been the provocative and instigative ones. It seems that they want a Russia – Ukraine war. They are acting like warmongers. Biden administration knows that the inclusion of Ukraine into NATO is challenging Russia and crossing the red line. They know that it will instigate and provoke Russia to take counteraction and that may start a real conflict between Russia and Ukraine. Still, they are continuously pushing statements about including Ukraine into NATO.

The Biden administration is also sending US military hardware and weapons to Ukraine. They have also said that they will send a small number of US and NATO troops to Eastern Europe to deter the Russian invasion of Ukraine. Recently, the Biden administration also warned the world and Ukraine about a serious military escalation at the Ukraine – Russia border despite the Russian officials saying that the crisis could still be handled; the situation could still be calmed down and the conflict could still be solved through dialogues.