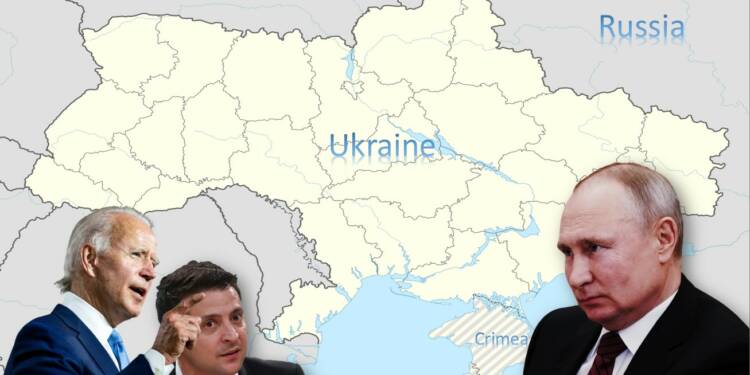 Russia-Ukraine tensions are picking up unprecedentedly. Russia has amassed 100,000 troops on the Ukraine border, and it seems things can escalate out of control very quickly.

No one wants to even consider a war, but what if military tensions spiral out of control? What can Russia do? And who is escalating tensions? Is it the Russian President Vladimir Putin to be blamed or his Ukrainian counterpart, Volodymyr Zelenskyy?

If you are following the Western media, you may be thinking that Putin is the wrong man here. After all, Western media is full of anti-Moscow propaganda over the issue. They say that Putin wants to invade Ukraine, something like the bigger shark devouring the smaller one.

But the narrative is completely manipulated. Putin doesn’t want to invade Ukraine. He simply wants to keep Russian influence in Eastern Europe to stay intact. He doesn’t want NATO expanding eastward and reaching into countries like Georgia and Ukraine. If the US can commit to this much, Putin will not escalate tensions.

The Ukrainian President isn’t keen to take on Putin either. Ukrainian leaders are actually asking citizens to stay calm. They are also saying that a Russian invasion is not imminent.

But Biden, the man who represents the Washington war lobby, has shot down Moscow’s request to bar Ukraine from joining NATO. He is arming Ukraine with American weapons, which is provoking Russia. And if Biden keeps provoking Moscow, Putin will have to do something.

What can Russia do?

Three scenarios emerge from possible Russian military actions and in all those scenarios, Ukraine is the biggest loser. Russia can take the diplomatic route too, but that would result in a stalemate in any case. So, in what three possible ways will a Russian invasion into Ukraine work out?

In the first scenario, Russia could invade Ukrainian territory and go as deep as the Dnepr River. Russia will use this as a bargaining tool, because there are multiple dams on the big river that could be opened, flooding the low-lying areas. So, Kyiv will have to agree on major concessions.

Alternatively, Russia could invade Ukrainian territory up to the Dnepr River and also an additional block of territory that connects Russia with the breakaway Transdniestria Republic (including Odesa). Ukraine will be thereby cut off from the Black Sea, leaving it economically isolated. Russia could also try to seize only the belt of land dividing Russia and Transdniestria (including Mariupol, Kherson, and Odesa) and again block Ukraine’s access to the Black Sea.

In the final scenario, Russia could invade the entire nation of Ukraine itself. And with its good hold over Belarus, Putin could consider the formation of a new tripartite Slavic union of Great, Little, and White Russians (Russians, Ukrainians, and Belarusians). This will make Moscow an incredibly powerful player in global affairs, increase its heft in Eastern Europe and help it in expanding its position in the Black Sea.

And for the US, this will be a huge strategic blunder. It will effectively tarnish America’s reputation as a world leader.

If Biden doesn’t stop provoking Russia, the US will have to face some terrible consequences in Eastern Europe that will completely diminish American influence in the region.