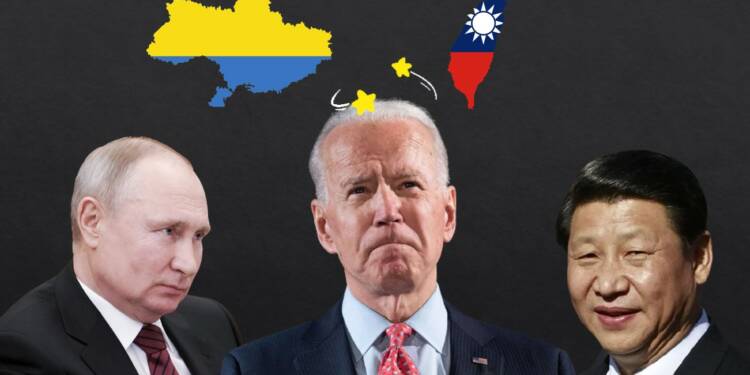 The misfortune of the world is the fact that an indecisive person like Joe Biden is sitting in the most powerful office in the world. His flawed policy approach towards China and Russia as well as flawed prioritisation with respect to Ukraine and Taiwan is costing the world immensely. At a time when the Chinese Communist Party and Xi Jinping are leaving no stone unturned to replace the USA as the pre-eminent world power, Joe Biden is not interested to counter these efforts — instead, he is enabling CCP and its anti-free world actions.

On the other hand, Joe Biden and his administration are more than willing to enable Ukraine’s ambitions to join NATO, an absolute red-line for Russia. However, these escalations do leave us with a question. Why are the US actions with respect to Russia are so different compared to how his administration is approaching the Chinese Communist Party and Xi Jinping? The answer is obvious: while the escalations in the case of Russia will have an impact on Europe, the actions on China will impact the diplomatic fortunes of the USA significantly. This coupled with Joe Biden’s continuing indecisiveness and his favourable attitude towards Beijing makes it all the more clear.

In exchange for peacefully transforming the snarling Soviet Bear of the Cold War into the playful cub of Gorbachev’s aspirations, Russians trusted the West to offer economic aid, political support, and, most all, acceptance into a broader European security environment. Instead, they got poverty and isolation, as the old Iron Curtain moved closer to Moscow. In international relations, trust is crucial. Its presence, intangible and unquantifiable, can still overcome seemingly insurmountable gaps. However, Joe Biden is no longer interested in a rapprochement with Russia to solely focus on China.

On the other hand, Vladimir Putin is anything but a novice. He knows what Biden intends to do to Eastern and Central Europe and how Washington is looking at ways to bring NATO assets and weapon systems right up to the borders of Russia. So, to protect its own interests, Russia is eyeing Ukraine. Conservative estimates suggest that Putin has deployed no less than 175,000 Russian troops on the borders of Ukraine – giving rise to a crisis in the region last seen only during the annexation of Crimea by Russia in 2014.

Since then, things have only worsened, and this has forced Joe Biden to come to the deliberation table. However, when it comes to China, Joe Biden not only kowtows to Xi Jinping but also throws its allies under the bus at crucial moments.

By inviting Taiwan, the US portrayed its commitment to defend democracies against communist tyranny. The US made the ostentatious move to showcase its boldness, its will to challenge the one-China policy, and its intention to call China’s bluff on Taiwan.

But when push came to shove on December 10, Taiwan was left in the lurch. Taiwanese minister got censored, humiliated, and reproved. She got punished for speaking the truth and for calling out China’s barbarism. Taiwan’s digital minister Audrey Tang appeared via video link to address the US-hosted summit on Friday. Tang presented a map showing countries ranked by civil rights as part of a “digital authoritarianism” discussion. No prizes for guessing, Taiwan and China were labelled with different colours.

After Tang concluded her remarks, the moderator went to some other panellists. 20 minutes later, Tang was again asked to participate in the discussion, but startlingly, her video feed was cut off. She was only audible. Needless to mention, the map differentiating Taiwan from China was no longer visible. If that’s not humiliation, then only God knows what is.

The different approaches towards Russia and China can help understand the positioning of these two countries in the world geopolitics. While Joe Biden knows that all Russia wants is the concretisation of the status quo in Eastern Europe; China wants to eat into the USA’s zones of influence and going ahead replace the USA from its position. In this regard, Joe Biden can afford to escalate the situation with Russia, but he cannot afford to tackle the China challenge given his squeamish China policy.