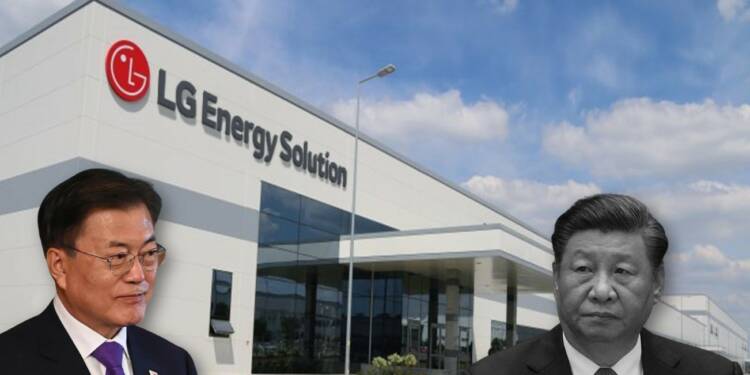 Electric Vehicle batteries are the fuel of the future. And that’s why countries around the world are restlessly working towards dominating the EV battery sector before any other country does. For instance, China has already secured a 40% share of the global EV battery market.

Chinese companies like CATL and BYD are spearheading China’s campaign of usurping global EV battery supply chains. You see, CATL singlehandedly holds a whopping 32.5% market share while BYD stands at 7%. We must admit, the numbers are quite impressive!

LG is eyeing rapid expansion in the times to come and is hoping to replace China’s CATL to become the world’s top battery manufacturer. Currently, the company holds a 20% share of the global EV battery market. Earlier this week, it announced plans to build a $2.6bn battery manufacturing factory in the US with General Motors.

So, China’s hopes of ruling the global EV battery sector have been ruthlessly dashed by South Korean giant LG Energy Solution. But that’s not all, another South Korean company SK Innovation is also fast catching up. The South Korean battery manufacturer currently holds a 5% market share and is expanding rapidly.

So, what’s behind the South Korean giants making impressive strides despite neck and neck competition from the Chinese firms? Well, it’s the impressive efforts being made by South Korea’s Moon Jae-in administration, which is vehemently supporting its EV battery firms through government-backed programs and incentive-oriented policies.

Earlier this year, South Korean President Moon Jae-in had said that South Korea will strive to become a global manufacturing powerhouse by 2030. In July, Moon had told the Korea Economic Daily that “batteries are the backbone of the Korean industries that hold the future of the country. We should sharpen our competitiveness to overtake our bigger rivals and further widen the gap with our followers.”

Read More: China was planning on becoming the global EV powerhouse and then it hit the South Korea speed breaker

The administration of President Moon Jae-in has stated that it will assist enterprises in creating next-generation products, such as solid-state batteries. An 80 billion won fund will assist small and medium-sized businesses in improving their ability to supply battery-making materials and components. The fund will be funded by the government, financial institutions, and the three battery manufacturers.

China’s EV firms at their weakest

This is enough to flatten China’s EV empire. Chinese EV companies so far thrived owing to massive subsidy programs that were funded by the Chinese government. However, the cash-strapped government this year announced that it will roll back its subsidy programs to meet the requirements of the Regional Comprehensive Economic Partnership (RCEP) that came into effect on the 1st of January.

Read More: How the RCEP may kill China’s EV industry in stillbirth

So, without the government’s backing, Chinese EV firms are today their weakest. And this will greatly help non-Chinese EV companies based out of South Korea, Japan, and the US. And that’s why South Korean battery-making companies like LG and SK Innovation are eying to tank China’s EV empire within the next eight years.