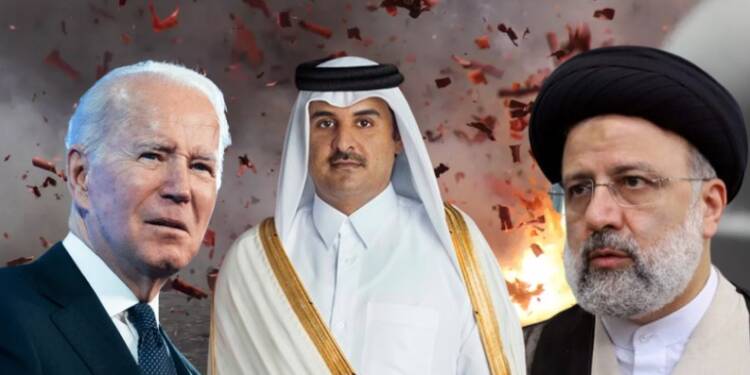 Since being elected as the US president, Joe Biden has been showing a soft corner towards Qatar and Iran. He is not just trying to please Qatar and Iran through his loose policies but he is also helping the two countries in reviving their relations. Biden’s policies are completely contradictory to Trump’s policies and are creating the risk of reigniting tensions in the Middle East.

Recently, amid the Russia – Ukraine conflict, the Biden administration asked Qatar to supply LNG to European countries. Because of the conflict, the risk of Russia blocking the gas supplies to Europe has increased, and the US wants to counter this Russian threat by using Qatar as a substitute.

In a recent white house meeting with Qatari Emir Sheikh Tamim, Biden announced that the US will designate Qatar as a major non-NATO ally. This clearly points towards future defence deals and collaborations between US and Qatar. The US already has a military base in Qatar.

This Monday, the US Secretary of Defense Lloyd Austin met Sheikh Tamim bin Hamad Al Thani, Amir of Qatar. Both of them discussed their cooperation in Afghanistan, regional security interests and defence partnership between the two countries.

Recently, Boeing, a US-based defence and aerospace manufacturer, signed the biggest freighter aircraft deal in its history with Qatar airways. Lawmakers, labour unions, and business groups applauded the announcement as just the most recent win in the Biden administration’s work to revitalize American manufacturing.

From the time the Biden administration has taken charge of the office, they have always displayed their intent to revive the Iran nuclear deal as well as to remove the sanctions on Iran. According to the latest reports, the US and its allies are on the cusp of finalizing the negotiations with the Iran officials and restoring the nuclear deal.

The US has also guaranteed Iran relief from sanctions and embargos as a result of the reviving of the nuclear deal. According to many experts, in a rush to revive the Iran nuclear deal, the Biden administration has stupidly ignored the chances and risk of Iran successfully developing a nuclear bomb. The Biden administration is aware of the fact that Iran has enough enriched uranium to make a bomb and is further progressing fast towards more uranium enrichment. Still, they seem to be not so serious about the issue.

During the Trump administration, the US cancelled the Iran nuclear deal and placed many sanctions on it. The Trump administration was very strict on the matter of Iran. It was also during the Trump era that the Arab countries like UAE, Saudi Arabia, Bahrain etc enforced a blockade on Qatar. Qatar’s alleged support for terrorism was the main reason for this action. Qatar was alleged that it had violated a 2014 agreement with the members of the Gulf Cooperation Council (GCC), of which Qatar is a member. Saudi Arabia and other countries also criticized Al Jazeera and Qatar’s relations with Iran.

Because of these actions and decisions by the Trump administration, Iran’s and Qatar’s economies suffered a lot. The two countries also saw a huge loss of opportunity in trade. This made them come close to each other and develop closer ties. Iran provided food shipments to help Doha avert a food security crisis. Iranian exports to Qatar jumped from around $60 million between 2016 and 2017 to $250 million between 2017 and 2018. Qatar Airways managed to continue its operations by utilizing Iranian airspace. In turn, overflight charges provided Iran with around $100 million in overflight fee revenues.

The Arab blockade of Qatar ended in early 2021. Soon, Biden took the Office of US president and started loosening on the Iran sanctions. This was the time when Qatar started reviving its relations with other Arab countries and on the other hand, Iran started getting closer with China. As the two countries were no more under global or regional isolation, there was no reason to remain committed to just bilateral relations and thus both Qatar and Iran expanded their outreach to Arab countries and China respectively.

In 2021, China agreed to invest $400 billion in Iran over 25 years in exchange for a steady supply of oil to fuel its growing economy under a sweeping economic and security agreement. Qatar too started reviving its relations with UAE and Saudi Arabia in terms of trade and investment.

Read More: Biden is trying his best to destabilize the ongoing Saudi-Iran peace talks at the behest of the Arms Industrial complex

Biden’s Middle East policy is completely opposite to Trump’s policy. Biden has been soft on Iran and is trying to revive the Iran Qatar bloc. He is loosening on the Iran sanctions and reviving the Iran nuclear deal. All of his actions point out his ultimate agenda to reignite conflicts in the region so that the US defence companies get to profit from it. His actions and decision will only create de-stability in the Middle East and will give birth to a new arms race. That’s where Biden has his eyes set, on the billion dollars of orders and contracts for the US military-industrial complex.