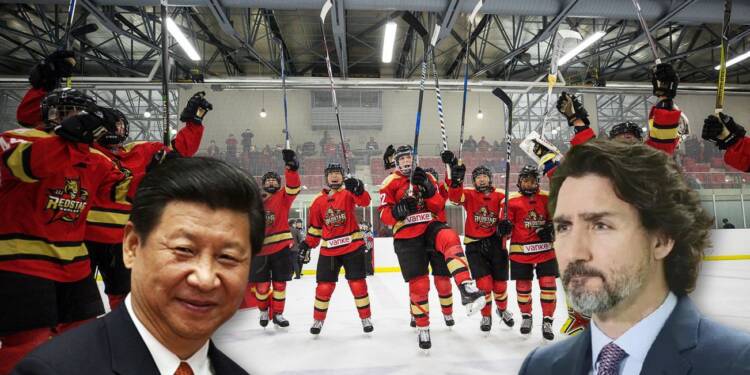 Strange things happen when you try to go out of your way for placating and appeasing a bully. And there is no better example of appeasement than the upcoming Beijing Winter Olympics.

At a time when China is facing worldwide criticism for its human rights abuses, it is finding appeasement directly by the International Olympic Committee (IOC) and Canadian Prime Minister Justin Trudeau. This has resulted in a weird ice-hockey team that will represent China but is actually made in Canada.

When Beijing was awarded the 2022 Winter Olympics, Chinese President Xi Jinping decided to flaunt it as a major propaganda victory. In fact, Chinese authorities are already preparing a grand show at the big event.

But there was a big problem. The host country got an automatic berth in the men’s ice hockey tournament at the multi-sports event. China however doesn’t have a bright ice hockey team and ranks 32 in the International Ice Hockey Federation rankings. China was up for a major embarrassment with top ice hockey teams like the US, Canada, Finland, and Germany participating in the tournament.

The sport isn’t very popular in China either and the country simply didn’t have the time and the resources to raise a world-class ice hockey team.

So, the Chinese officials did what they do best- import talent. For importing foreign talent, preference was to be given to those having ethnic ties to China and Asian options were supposed to be placed above other options.

But the newly assembled squad with an element of racial segregation didn’t really work for China. In late 2021, even the IIHF seemed uncertain about an awful Chinese team. Luc Tardif, IIHF President even said, “Watching a team being beaten, 15-0, is not good for anyone, not for China or for ice hockey.”

Anyhow China finally came up with a final team on January 27 this year. The composition? 11 Canadians, nine Chinese, three Americans and one Russian. Yes, the Chinese ice hockey team has more Canadian players than the Chinese players.

Were the rules twisted to let China make an ice hockey team?

You may be thinking that it is just bad optics for China to present an ice hockey team, which is actually not Chinese.

But there’s more to this story. The Olympic Charter and the IIHF regulations carry a clear mandate- the athletes competing for a country at the Olympic Games must actually be the citizens of that country. Since China doesn’t allow dual citizenship and naturalisation as a Chinese citizen is also extremely rare, it is quite improbable that the foreign players imported by Beijing have become Chinese nationals.

And it isn’t just about ice hockey either. The case of Eileen Gu, a San Francisco-born skiing star is just as befuddling. She is participating in the tournament for China and has become popular in the country as “the Snow Princess”.

The role of Justin Trudeau too is under the scanner here. When he has already announced a diplomatic boycott of the Olympic Games, why couldn’t he have also avoided helping China build its own ice hockey team?

It is clear that the Beijing Winter Olympics are not being organised in the spirit of international comity. It is a part of China’s propaganda drive, but international leaders are still placating China and are perhaps even bending the rules in order to accommodate the Communist country.