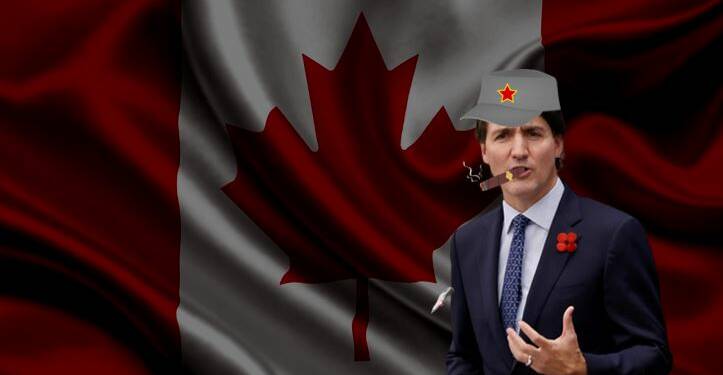 “Unacceptable views” and “fringe minority” are some of the top trending words in Canada today. Prime Minister Justin Trudeau seems to have lost his senses to the sights of a massive “Freedom rally” being organized by Canadian truckers.

Angry Truckers are on roads, while the Canadian Prime Minister has conveniently packed himself at a safe but undisclosed location. With Covid-19’s auspices, Trudeau has devised a way to keep himself from the protestors and media citing isolation protocols.

Not so long ago, Trudeau would sincerely thank the truckers for keeping Canadians fed through their deliveries. During the pandemic, their role became even more crucial to keep the supply chains up and running. And today, the Canadian PM has coined a new term for these truckers—“fringe minority.”

Read more: If Trudeau declares “Truckers,” a threat to Canada, he can kiss his job goodbye

Why Truckers are fuming at Trudeau?

Trudeau must acknowledge there’s a reason why Truckers seems vexed with his government. They are opposing vaccine mandates. Truckers in Canada must undergo a 14-day quarantine period if they are not double jabbed. For worse, this policy has now also been implemented in Biden’s America. Instead of listening to the truckers’ woes, the Prime Minister declared that they held “unacceptable views.”

“The small fringe minority of people who are on their way to Ottawa, who are holding unacceptable views that they are expressing, do not represent the views of Canadians,” Trudeau said. And look, who came to roast the PM at his silly remarks for Canada’s citizens? Elon Musk! When the huge Truckers convoy hit the capital city of Ottawa, Musk tweeted, “It would appear that the so-called ‘fringe minority’ is actually the government .”

Frankly speaking, Justin Trudeau is baffled. He never faced the opposition of such a level. Covid-19 may help him review his position, but for now, suppressing the ‘Freedom Rally’ seems to be his top priority. And he’s also bringing some laws to regulate social media to rein in the overflow of “hate speech” and “extremist views” on various platforms.

Trudeau just declared that some Canadians have "unacceptable views".

Now he has introduced a bill to regulate the Internet.

Give his historical rage against Rebel News, it is a certainty that we will be targeted by him.

He always told us China was the country he most admired. https://t.co/E7FRrkuQq7

Social media companies in Canada must brace for tough days ahead. Canadian PM is going to go any length to ensure that social media in Canada remains “hate” free. And in Trudeau’s Canada, speaking against the government indeed amounts to “spreading hate” and holding “unacceptable views.”

The Canadian Security Intelligence Service warned in 2020 that “neo-Nazis” and “white supremacists” are among the extremist groups using social media to disseminate hate campaigns.

This statement glutted with systemic bias against white Canadians reeks of an imminent crackdown on anti-Trudeau voices on Canadian social media. CSIS noted in that report that the extremist language being used frequently blames the pandemic on “Jews, China, immigrants, the government and societal elites.”

Censorship to be the new staple of the Trudeau administration

We are not surprised actually! Anything deemed harmful to Chinese interests is sure to irk Justin Trudeau in great proportions. So, those criticizing China for spreading covid-19 in the world will now face blanket ban and censorship by the Canadian government.

Trudeau was re-elected with a minority government in September 2021, and he knows he’s already on the edge. Words like “fringe minority” and “unacceptable views” can’t come from a leader believing in democracy and respecting people’s freedom of speech. One will find these words in dictionaries of authoritarian leaders like Xi Jinping, Kim Jong-un, or Fidel Castro. And when a democratically elected leader starts displaying traits of an authoritarian dictator, it’s a foregone conclusion that he is living on borrowed time already; just like Justin Trudeau, whose political fortunes have already started sinking.