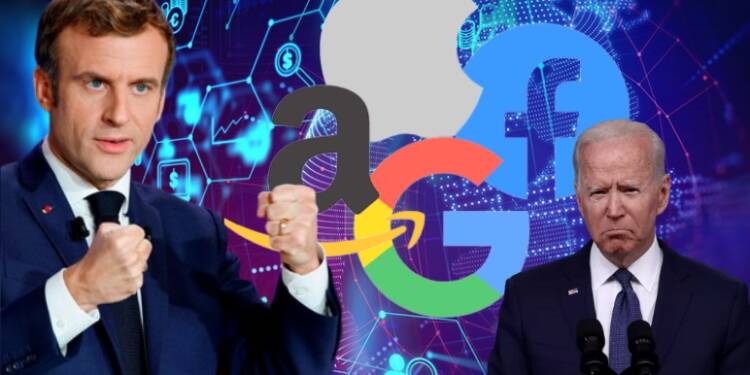 Big Tech firms are facing unprecedented legal hurdles in Europe. Thanks to France, the EU had adopted a package of rules under the Digital Markets Act (DMA) last December, imposing strict limits on the behaviour of so-called “gatekeeper” platforms.

What do the new EU rules say?

Politico reported that new rules would prevent “killer acquisition” by Big Tech firms. They will also include a new obligation for Big Tech firms to allow users to both uninstall pre-installed apps and provide the option of switching to rival apps. This means that android users will not get phones with chrome browsers already installed in it; instead, they will get a choice of opting for rival browsers as well.

The US, however, is not pleased with this development. Washington thinks that the new EU rules will particularly target American firms hailing from Silicon Valley. And the US is not wrong in its assessment either.

Read More: The stage is set for a grand France-USA clash in the Middle East as Macron is in no mood to relent

Why the US is feeling annoyed?

Under the new DMA rules, only those firms will be targeted that have a turnover of at least €8 billion, and a market capitalization of at least €80 billion. Simply put, only American firms will be targeted under the new text adopted by the EU parliament. Some of the world’s largest digital platforms, including Google, Amazon, Meta (Facebook) and Apple will surely face the music in the times to come.

The US is now pressing Brussels to amend the DMA rules to ensure firms outside the US are also targeted, and they don’t squarely focus on Silicon Valley firms. In a paper submitted to Brussels officials recently, the US said, “We have also been clear that we oppose efforts specifically designed to target only U.S. companies where similarly situated non-U.S. companies would not be covered.”

“The EP’s proposed scope would exclusively target U.S. companies, not just when the law is implemented, but for years to follow. The United States continues to note that it will be important that the EU implement the law in a non-discriminatory fashion and ensure appropriate coverage for all appropriate firms,” the paper continues.

France wrote all over the new rules

France has made it a top priority agenda to rein in American Big Tech firms during the six months of its presidency through the first half of 2022. Earlier this month, French President Emmanuel Macron had said, “the French presidency must be a moment of truth for the regulation and accountability of digital platforms, the carbon pricing at European borders on imported products, minimum wages, and our relationship with Africa.”

Now, the French administration is fiercely pushing Brussels for adopting the new rules, even as Biden warns the EU of its repercussions on American firms. As per a DW report, Macron wants to move forward two major pieces of EU legislation on digital protections.

In December 2020, the European Commission had put out proposals for the Digital Services Act (DSA) and the Digital Markets Act (DMA). Macron is now also pushing the EU commission and the parliament to fast track discussions on these proposals as well.

Macron is faced with general elections this year, and he’s pushing for these Big Tech reforms to ensure a level playing field for all tech firms in the EU within months from now. Given the unholy coalescence between the Big Tech firms and the Biden administration, the US is now trying every trick in the book to jeopardize this France-led crusade against the hegemonic Silicon Valley firms.