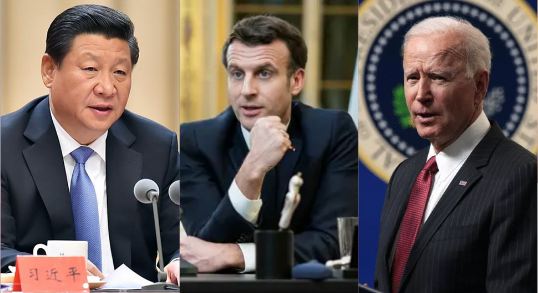 Remember, how Joe Biden used to tell you that Donald Trump has failed to take American leadership forward? The sitting US President used to tell Americans that Trump has ruined US alliances all across the globe. Biden also promised that if elected to power, he would restore Washington’s central position in the world.

However, today Biden is in power. But within a month of his assuming office, the US seems to be losing leadership of the world’s most crucial region- the Indo-Pacific. And to make it worse, France seems to be making massive strides when it comes to replacing US leadership in the region under Biden’s pro-China regime.

What does this meeting suggest? As Biden fails to keep Indo-Pacific allies including the fellow QUAD members in confidence, France is occupying the vacuum which the US President is creating. India, Japan and Australia are consistently growing aware of how Biden is trying to dilute the anti-China rhetoric in the region and therefore, they are welcoming France’s increasing footprint in the region to compensate for Biden’s incompetent leadership.

Apart from India and Australia, France has also managed to enhance cooperation with the other QUAD member- Japan. As per the Japanese Defence Ministry, a French Navy vessel will conduct surveillance activities in the East China Sea, where Japanese and Chinese vessels often get involved in face-offs, until early March.

The fact remains that France has inherent interests in the Indo-Pacific to safeguard including overseas territories like the Reunion Island, French Polynesia and New Caledonia. This is why the French President Emmanuel Macron isn’t losing out on any opportunity to ramp up Paris’ presence in the Indo-Pacific.

Macron wants to make the French Navy an overwhelming force in the Indo-Pacific region. In fact, French nuclear attack submarine SNA Emeraude recently conducted a patrol in the hotly contested South China Sea. This was a statement of intent to China, the QUAD nations and also the South China Sea disputants.

Paris is conveying that even if the US withdraws from the hotly contested South China Sea, French military will tame Chinese belligerence and manage the balance of power in the region. French Minister for the Armed Forces tweeted, “This extraordinary patrol has just completed a passage in the South China Sea. A striking proof of our French Navy’s capacity to deploy far away and for a long time together with our Australian, American and Japanese strategic partners.”

The French military is actually upping the ante in the Indo-Pacific. Paris is looking at a broad spectrum of military activity from patrolling in hotly contested regions where Beijing acts as a bully to drills with French allies.

HT, for example, has reported that according to people familiar with the matter, India and France will conduct exercises with INS Vikramaditya and France’s Charles de Gaulle aircraft carrier strike force. The joint exercise will be conducted in the Arabian Sea- a maritime region of strategic importance for India.

The French military is actually on a roll under Macron’s leadership. As per SCMP, the French Navy has dispatched an amphibious assault ship the Tonnere and the frigate Surcouf to the Pacific for three months. The important thing here is that the French Navy is planning two voyages through the South China Sea in a deliberate attempt to poke the paper dragon in the eye.

In fact, China has reacted rather timidly to French Navy’s ambitious Indo-Pacific and South China Sea plans. Chinese State media publication, China Daily stated, “France has no military bases or mutual defense pacts in the region, unlike the US, but is evidently seeking to court Washington’s favor by supporting the so-called Quad, the emerging unofficial military alliance of Australia, India, Japan and the US, which is intended to contain China.”

China Daily added, “France, which still controls some islands in the South Pacific, has recently begun to wrongly perceive China as a competitor in that part of the world due to its growing investments there, which might be influencing Paris’ desire to cozy up with the Quad.”

While the Biden administration tried to downplay China’s State-sponsored genocide against the Uighur Muslims, France has denounced it in unambiguous terms. Similarly, Paris is making it clear that it won’t let Pakistan and China internationalise India’s internal matters in Kashmir.