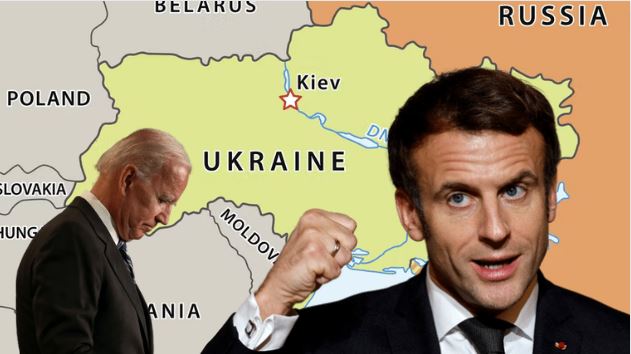 As Joe Biden hypes up tensions on the Ukraine-Russia border by pushing a fake invasion theory, French President Emmanuel Macron has decided to take the matter into his own hands. Next week, he will be travelling to Ukraine and Russia to defuse the tensions and give another chance to diplomacy over military adventurism.

On Thursday, the US accused Russia of fabricating a fake attack by the Ukrainian forces on Russia, which the Kremlin could use as a pretext for launching military action. However, the US has refused to elaborate further on this bombshell revelation. This development has further deteriorated the security situation in the region, following which Macron has decided to visit Moscow on Monday and then Kyiv on Tuesday.

Macron takes back control of the peace process

On Wednesday, Macron had telephoned Joe Biden to explain to him about France’s diplomatic efforts on the Ukraine crisis. On Thursday, Macron had talked to Ukrainian and Russian leaders to “identify elements that could lead to de-escalation,” and “conditions for strategic balance in Europe, which should allow for the reduction of risks on the ground and guarantee security on the continent.”

Macron realizes that the USA’s moves on the ground have yielded negative results for the peace efforts. Not only the US is providing Ukraine with military equipment and ammunition but Uncle Sam is also fueling tensions through well-organized information warfare against the Russian federation. Now Macron is trying to make his own mark on the diplomatic efforts being made by the EU and NATO.

Macron’s face-to-face meeting with Russian President Vladimir Putin is expected to bring mercury down on the Ukraine-Russia border. This will also help Macron’s approval ratings at home right before the upcoming French elections. France is going into elections this April, and Macron would like to encash his diplomatic finesse.

People in France hold a pragmatic viewpoint of the ongoing Ukraine crisis, and around 53% people believe that Ukraine must first get its act together before more substantial long-term support can be given. Also, people look askance upon the way the US is tackling the situation and doubt whether its intervention would bear any positive result. So, Macron is now pitching his own style of diplomacy in the face of failing US efforts.

France ambitions of leading the EU

France is also chairing the European Council in the first half of 2022, and his successful mediation efforts would definitely help legitimize the French leadership of the bloc. “He wants to carve out a special role for himself and Europe, in NATO but at its edge,” said Nicole Bacharan, a researcher at Sciences Po in Paris. “The case for modernizing the European security arrangements in place since 1991 is compelling. But doing it with 130,000 Russian troops at the Ukrainian border is impossible.”

Biden is adamant about admitting Ukraine into NATO, which is perceived as overstepping Putin’s red line and risks inviting Russia’s wrath. Macron, however, is resisting the American approach and is demanding a pragmatic viewpoint from the White House. As per one diplomat close to French Presidency, Macron was involved in the drafting of the firm American response to Russian demands that the West cut its military presence in Eastern Europe and guarantee that Ukraine never join NATO.

Macron is now clearly undermining Joe Biden in the peace process and is taking back control of Europe’s steering wheel from the US. Macron is freeing the EU from America’s clutches and is further solidifying France’s position as the EU’s commander-in-chief.