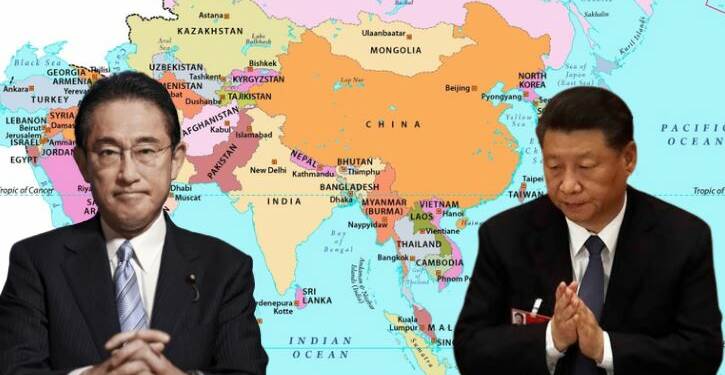 There is no dispute over the fact that trade is the biggest geopolitical tool for any country. You see, Russia has today effortlessly checkmated American incendiary actions in Ukraine using ‘gas trade’ as a bulwark. Similarly, Japan is now striving to end China’s hegemonic trade practices by devising new long-term trade strategies in Asia and around the world.

A Nikkei Asia report has now revealed that the Japanese government is set to promote data-sharing among companies in Asia to strengthen supply chains in the region. The goal is to counter the monopoly held by the companies of the US and China in the data sharing sector.

The European Union is already building its data-sharing network to bring transparency to European supply chains. Now, Japan is following the suit to end China’s monopoly in Asia’s supply chains.

As per Japan’s Ministry of Economy, Trade and Industry (METI), the data-sharing network will enable companies in Asia to smoothly exchange data, such as inventory information on products and parts, as well as information on potential disruptions in procurement. The ministry is also promoting the digitization efforts in a major review of industrial policy.

How Japan’s move will hurt China?

Thousands of companies from several nations will be asked to provide data to this sharing network. This way, the companies will get to decide how much data will be shared. The infrastructure will be designed to bring transparency and diversification to the supply chains. Also, it will become a lot easier for companies to shift their supply chains out of China, and find better alternatives using the data provided by the data-sharing network.

Currently, Google and China’s Alibaba are two data-sharing giants. But the Japanese government is concerned that it will be difficult for Japanese companies to preserve their industrial secrets if Japan’s data-sharing network is not built. And it makes complete sense; after all Chinese companies can’t be trusted in the pursuit of making Asia’s supply chains ‘China-free.’

The reason behind Japan’s economic aggression

Japan has a geopolitical axe to grind with China, given CCP’s brazen display of military misadventure in the Indo-Pacific region. China has its lustful eyes set on Japan’s Senkaku islands and Taiwan, which Japan considers a threat to its national security. Not only Japan is strengthening its armed forces, but it is also developing trade and commerce strategies to hurt China where it hurts the most.

Japan is also trying to turn Southeast Asia into a logistical hub. Already, several Japanese companies and manufacturers have facilities in Southeast Asian nations. In a move that is aimed at countering China and also ensuring that ASEAN as a whole relies on Japan when it comes to supply chain fulfillment and distribution of goods, a Japanese developer is going to change the face of logistics in the region.

Read More: Japan is encircling China with logistic hubs in South East Asia to give it a slow and excruciating death

Japanese developer Daiwa House Industry will soon be launching an international logistics business in Southeast Asia, catering to the growing number of Japanese manufacturers operating in the region. According to a report by Nikkei Asia, Daiwa Logistics will provide a one-stop shop for third-party logistics services, including transportation and warehousing.

Japan is fast emerging as the leader of Southeast Asia, which all ASEAN countries can trust and repose their faith in. This will help Japan in bolstering its presence in the region. This way, Japan will be able to establish itself as a better alternative for trade-hungry countries in the region. It will also help Japan achieve its desired position to exploit its trade influence on these countries to stonewall China’s expansionist ambitions.

Quotes Similar to Let your smile change the World