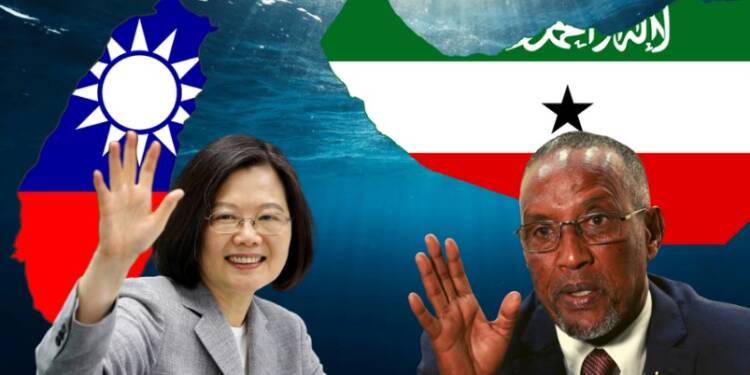 Somaliland is a country in the Horn of Africa area of Africa. It borders Ethiopia to the south and west, Djibouti to the northwest, and has hundreds of miles of coastline along the Gulf of Aden to the north. Somaliland’s ports remain a source of international interest and rivalry between global powers. However, in this highly contested region, there is an unlikely winner and that is Taiwan.

Taiwan’s push to grow its presence on the world stage as China poaches its diplomatic allies saw Taiwan rolling out the red carpet on Wednesday to a new friend in a similar position – Somaliland. During his government’s first cabinet-level visit to Taiwan, Somaliland’s foreign minister, Essa Kayd Mohamoud, hailed the relationship as “a rare and historical friendship between two champions of democracy in Africa and Asia.”

The Horn of Africa and Somaliland’s importance

The North-Eastern region of the African continent including the countries of Sudan, Eritrea, Ethiopia, Djibouti, and Somalia is known as the Horn of Africa since the group of countries forms a horn-like landmass over the peninsula. It is the entry point to the Suez Canal and a fulcrum of international geopolitics. This is why Somaliland becomes a very important country for world powers who want to control the region.

Somaliland seceded from Somalia in 1991, although its independence has yet to be recognised internationally. While Somalia has been embroiled in a three-decade civil war, the region has remained mainly quiet. In 2020, Taiwan, which China claims as its own territory and is similarly diplomatically isolated, and Somaliland established representative offices in each other’s capitals.

Also read: With his pointless sanctions on Ethiopia, Biden has ceded the Horn of Africa to Russia

Taiwanese Foreign Minister Joseph Wu announced in an official statement on July 1, 2020, that, the two countries had decided to develop connections based on “friendship and a shared commitment to fundamental values of freedom, democracy, justice, and the rule of law.”

Taiwan and Somaliland, according to Tsai, are democratic partners that share similar values. “For Taiwan’s Africa project, Somaliland is now a key site in East Africa,” she noted. China has effectively forced Taiwan out of Africa diplomatically in recent years, with only eSwatini maintaining full diplomatic connections with the island.

As it works to assert its sovereignty claims, China has increased pressure on countries not to engage with Taiwan. Kayd claimed Somaliland was a sovereign republic with a right to international connections, an apparent dig at China’s opposition to their Taiwan friendship. Taiwan has been eager to demonstrate its commitment to Somaliland’s growth by donating 150,000 doses of its domestically made Medigen COVID-19 vaccine last month. Somaliland is strategically located on the Horn of Africa, bordering Djibouti, where China has its first overseas military station.

Berbera and Zeila, two old trading cities in the Horn of Africa, have long piqued the interest of international powers due to their strategic location near the Bab el-Mandeb Strait, which connects the Gulf of Aden with the Red Sea. Because of its strategic location, Somaliland’s coastal ports are among the most valuable real estate in the region, serving as a viable option to Djibouti as a vital participant in trade, development, energy, and water security for the Red Sea and the Horn of Africa.