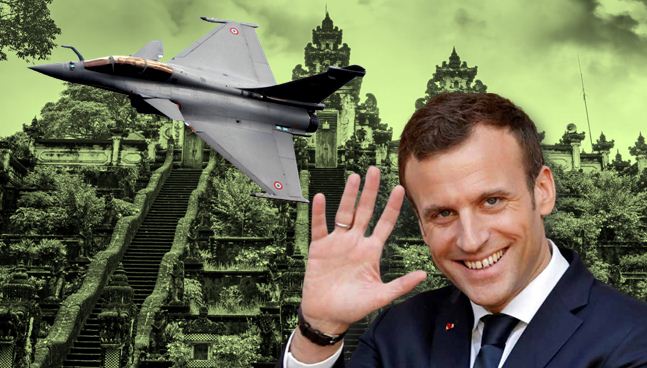 The Biden administration has betrayed so many of its allies and friends such that it’s difficult to keep track; be it Afghanistan, Taiwan or Joe Biden’s classic case of betrayal of France and the European Union in relation to the AUKUS deal. However, in the case of France, what the betrayal did was to make it re-imagine its priorities and security cooperation with people in the Indo-pacific. Now, French President Emmanuel Macron, with one single step has avenged Joe Biden’s AUKUS betrayal in its entirety.

The Indonesian and French defence ministries have reached an agreement on two large equipment contracts that will see Dassault fighter jets and attack submarines enter Jakarta’s air force and navy, respectively. Indonesia has bought up to 42 new Rafale fighters to give a refined touch to its air force, according to French Defense Minister Florence Parly, making it the eighth export country to commit to the Dassault Aviation-built aircraft.

The agreement comes as Paris, which sees itself as a global maritime power, tries to strengthen its geopolitical connections in the Indo-Pacific following the genesis of AUKUS, a new strategic alliance between the US, the UK, and Australia last year.

According to Reuters, the French contract is worth $8.1 billion and includes an initial six jets and a pledge to buy 36 more. A statement from Dassault said the purchase includes aircrew training, logistics support for various Indonesian air bases, and a training centre with two full-mission simulators. Dassault’s French facility will produce the planes. The aircraft is also being built with the cooperation of French businesses Thales and Safran Aircraft Engines.

In 2021, three countries opted to add Rafale to their fleets. Greece had intentions to purchase 18 jets in January 2021, including six new planes and 12 used planes. Croatia decided to buy 12 used planes in late November, and the United Arab Emirates ordered 80 Rafale jets just a few weeks after. The Dassault fighter jet is also used by Egypt, Qatar, and India.

Indonesia will become the second country in the Indo-Pacific area, after India, to rely on the Dassault Aviation jet. Dassault Aviation said the agreement was the beginning of a long-term cooperation that would allow expanding its presence in Indonesia on a quick basis. This specific news of the arrangement boosted the company’s stock by almost 4%.

Not only the company but the geopolitical stocks of France burgeoned in the Indo-Pacific. While the US was trying to outsmart France by sabotaging its deal with Australia and signing the AUKUS, the telling case remains the slew of deals that France signed that out of blue has turned the fortunes entirely.

It is unprecedented of France to take such a radical decision, at best epitomizing its fury. France has minced no words in describing its anger against allies including the US, UK, and Australia. The French Foreign Minister called the deal a “unilateral, brutal and unpredictable decision”. While speaking to radio station Franceinfo, Le Drian said that it was a “stab in the back” and added that France had established a relationship of trust with Australia, and it has now been “betrayed”.

Read more: After getting backstabbed by the US, France steals an 80-Jets deal with UAE

The French government had immediately recalled its ambassador to the U.S. in response to the then announced national security partnership between Washington, Canberra, and London. Jean-Yves Le Drian, the French minister for Europe and foreign affairs, said that the move was made at the request of President Emmanuel Macron himself, and that “this extraordinary decision reflects the exceptional seriousness of the announcements made on September 15 by Australia and the United States.” This did not bode well with any of the allies in the European Union and the organisation vehemently criticised Joe Biden for keeping long-standing allies in the dark.

These developments made France realise that it cannot trust Joe Biden anymore and the latest geopolitical triumphs that Paris achieved are directly related to this discernment. According to a French defence ministry official, the agreement signed on Thursday will make Indonesia, which is presently ranked second behind Singapore as France’s largest military procurement client in Southeast Asia. The statement is akin to a declaration of victory, given France, is now the most influential western power in ASEAN, which is central to the Indo-pacific.