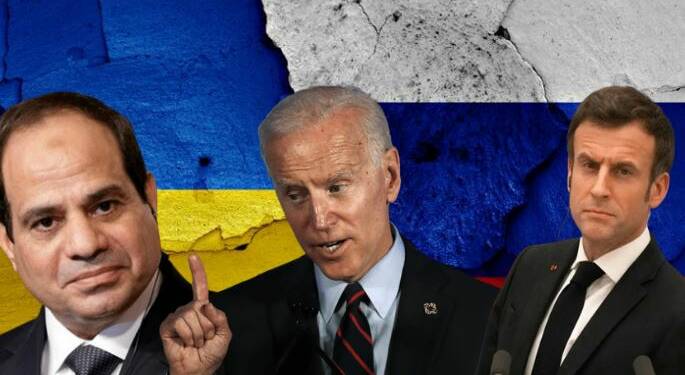 Egypt has regained its significant geopolitical clout in the Middle East since it was able to play a major role in the management of the escalations between Israel and Hamas last year. As the influence of the US under the Biden administration has depleted in the Middle East, the importance of Cairo has increased exponentially. However, this is not the end of Al Sisi’s ambitions.

For the uninitiated, there is a war like situation at the Ukraine Russia border. Russia has mobilised a 100,000 troops and Ukraine is standing its ground while denying that there is any real threat from Russia. Russia on the other hand is opposed to extension of NATO on its gates. NATO countries are dutybound to help each other in the event of a war. But it’s not the 1960s and the EU is increasingly getting miffed at the USA’s constant deceptions. It was an American President that exposed them to the hellfires of the Middle East and it was an American president again who oversaw the worst evacuation exercise in modern history.

Additionally, France, the current leader of the European Union was irked by the US when the latter went ahead with the AUKUS deal with Australia, which resulted into the cancellation of a major defence deal for France.

A France led EU has left its NATO comrades to fend for themselves for now because It’s the Russian gas that powers Europe. So Biden is now on a gas-deal-hunting-expedition for the European Union, but France has an entirely different plan. A plan that features Egypt.

As the leverage of gas supplies to Europe have become central to the Ukraine-Russia crisis, the importance of Egypt as the perfect mediator has gained international importance. In recent times, Egypt has invited the interests of France (which is leading the European Union), as Emmanuel Macron looks to peacefully end the current crisis between Ukraine and Russia.

You see, the current US President Joe Biden has been trying to use the North Atlantic Treaty Organisation for maintaining its supremacy in Europe. For this very reason, he has been artificially fomenting escalations with Russia on the behest of Ukraine. While the entire European continent is aware of their over the top energy dependence on Russia and thus want peaceful resolution of the issue, Biden has an entirely different agenda.

Read more: With back to back visits to Ukraine and Russia, Macron is making it clear who the boss is

To make sure his agenda is not compromised, he is appeasing long-standing enemies of US allies, so that European Union’s dependence on the USA remains constant. Recently the US said that it will be meeting with the officials of Eni, Total Energies and other energy companies operating in Algeria to see if more gas can be sourced from the country.

The move comes as Washington intensifies efforts to find alternative gas supplies for Europe in case any disruption arises from the standoff between Russia and Ukraine. However, this is not out of any altruism. He wants to make sure any replacement to gas supplies to Europe come from the US managed channel.

Emmanuel Macron understands the selfish intentions of Joe Biden. France is chairing the European Council in the first half of 2022, and his successful mediation efforts would definitely help legitimize the French leadership of the bloc. Not only this but making Europe energy independent will also give a free hand to Mr Macron with respect to the overall foreign and economic policies of the European Union.

Also read: Macron is stealing Egypt away as Biden gets dumped in the Middle East

This is where Egypt comes into the picture. On Friday, Egyptian President Abdel Fattah Al-Sisi and his French counterpart Emmanuel Macron addressed recent developments in Libya as well as coordinated efforts to restore security and stability in the region. This occurred during their meeting in Brest, France, where the Egyptian president was attending the One Ocean summit.

Libya becomes important because it can be the replacement to the offer of energy supply from Algeria which Joe Biden is professing. By circumventing Joe Biden’s Algeria offer, Macron will not only ensure not getting trapped by a US offer, but it will also remove any and every shackle that a US-dependent EU may have had to endure.

Libya: a possible alternative and the Egypt factor

Libya, at 53 trillion cubic feet is ranked 21st in the world for proven gas reserves. Libya has proved reserves that are equal to 338.2 times its annual consumption, omitting unproven reserves. When all of its reserves are considered, net exports account for barely 0.3 per cent of total reserves. This tells us the immense potentiality of the country as a source that can quench European gas needs.

However, given the unstable political situation in the country, it becomes difficult to utilise the potential. This is where a reinvigorated Egypt under Al Sisi comes into the picture. During the recent meeting between the two leaders, Macron appreciated the: “Egyptian efforts to safeguard Libyan national institutions and enhance the path of the political settlement of the crisis.”

In line with this, on Thursday, the Egyptian Ministry of Foreign Affairs shared in a statement, following the appointment of Bashagha as head of the Libyan government, that Egypt: “Trusts the ability of the new Libyan government to ensure security, unity and sovereignty of the country.”

These efforts by Egypt to stabilise its neighbourhood, is in the direct interest of France and the European Union. By making sure that Joe Biden does not get a say in the supply of gas to Europe and creating an independent source of energy supply; Macron will be able to solve the current crisis between Ukraine and Russia peacefully. However, all will be entirely dependent on how successful Egypt is in ensuring a consistent energy supply to Europe via Libya, making it central to the entire chain of events.