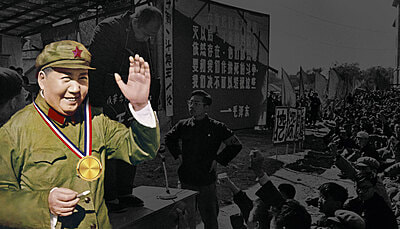 The People’s Republic of China’s Anti-Rightist Campaign, which ran roughly from 1957 to 1959, was a political campaign to purge supposed “Rightists” both within the Chinese Communist Party and overseas. Chairman Mao Zedong initiated the effort, while Deng Xiaoping and Peng Zhen also played key roles. China’s democracy was severely harmed by the Anti-Rightist Campaign, which effectively converted the country into a one-party state. Rightists were defined in a variety of ways, sometimes including government critics on the left, but they were officially stated as intellectuals who supported capitalism or opposed one-party control as well as forceful, state-run collectivization.

During the “Boluan Fanzheng” period, China’s official statistics show that the anti-rightist campaign resulted in the political persecution of at least 550,000 persons. According to certain estimates, the number of persecuted people is anywhere between 1 and 2 million, if not more. Deng Xiaoping stated that the Anti-Rightist Campaign had made mistakes, and most victims have been rehabilitated since 1959. 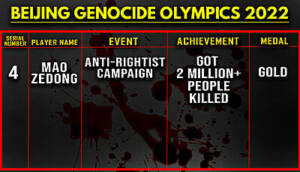 100 flowers campaign: A trap in the making

Late in 1956, Mao abruptly relented and took a step back politically, launching the infamous “Hundred Flowers Campaign” across the country, in which he urged the general public, pro-democracy activists, former entrepreneurs, artists, and, in particular, academics to openly and freely express their views on the communist regime and point out the party’s mistakes so that it could correct itself. Hundreds of thousands of people from all walks of life began to eagerly share their thoughts on the dictatorship and critique the Communist Party’s mistakes in response to Mao’s plea.

The blunders pointed out included increasing centralization of power at the expense of democracy, taking a “lean-to-one-side” approach to Beijing-Moscow relations, ultra-left economic policies, a lack of tolerance for dissent in academia, intense media and art censorship, and local party officials’ neglect of poverty in rural areas, among others.

While millions of innocent Chinese people eagerly expressed their opinions, believing that the Communist Party would listen, perhaps none of them realised that the entire “Hundred Flowers Campaign” was a sinister trap set by Mao as a prelude to his subsequent massive crackdown on those who opposed the Communist Party and its ideology.

As Mao put it, the party could only genuinely identify pro-capitalist class foes hiding in every corner of the country waiting for opportunities to destroy the socialist cause by forcing people to come out and state their thoughts. Then, in June 1957, when the “Hundred Flowers Campaign” was in full swing, Mao decided that the time had finally come to “kill the snakes.”

On June 7, 1957, he reversed course and instructed the People’s Daily to publish an editorial criticising rightists. On the same day, Mao produced an internal memo titled “Time to coordinate counter-attack against the rightists’ persistent offensives,” which he subsequently disseminated down to all levels of the party apparatus on June 8.

In June 1957, Mao Zedong formally launched the Anti-Rightist Movement. The campaign supposed “rightists” within the Chinese Communist Party, and more than 300,000 people had been classified as such by the end of 1957 alone. The Anti-Rightist Movement, which lasted until 1959, laid the groundwork for the Chinese Communist Party’s other radical initiatives, such as the Great Leap Forward and the Cultural Revolution.

In 1958, future premier Zhu Rongji was ousted from the State Planning Commission. The majority of the defendants were academics. The Lushan Conference, held from July 2 to August 16, 1959, was the start of the second phase of the campaign. General Peng Dehuai, the PRC’s defence minister and a critic of the Great Leap Forward, was chastised at the conference.

The above explanation not only tells us how shrewd Mao was in his purge of any and everyone who he found had views contrary to the one he espoused. As mentioned above, the number of persecuted people is anywhere between 1 and 2 million, if not more. In reality, the total purges went beyond 2 million people.

China locks up 1.5 million Chinese to harvest their organs and pocket $1 billion every year