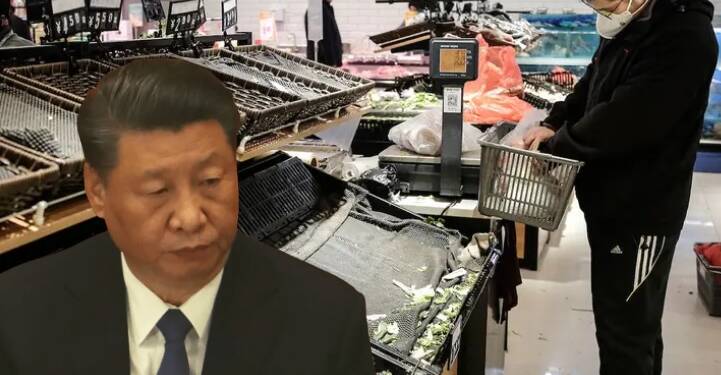 The Chinese communists are always hungry. They can’t seem to satisfy their hunger no matter how much they eat. Their demand for food is fueled in part by their fear that their country may run out of grains soon. As a result, they want to consume as much as possible before a famine occurs in China. China’s hunger, greed, and thirst for food, on the other hand, is costing the rest of the globe dearly. China has accumulated about half of the world’s food grain stockpiles, putting millions of people in danger of starvation and sparking a global food crisis. Food prices have risen over the world as a result of China’s brazen grain hoarding.

As reported by The Diplomat and mentioned in our previous publications, food security has been a top goal for China’s central government for several decades. Beijing has attempted to enhance its focus on food security by increasing agricultural production and diversifying imports, and President Xi Jinping’s recent words indicate that China’s food security remains a high priority. Based on various recent conferences, policies, and the release of five-year plans, there are already several hints as to what the Chinese central authorities may prioritise in terms of food security for this year and beyond, ahead of the 20th National Party Congress this year and the release of the No. 1 policy document (FYP). Other factors include gene-edited plants’ potential impacts and the commercialisation of genetically modified (GM) crops.

Xi stressed at a recent Politburo Standing Committee meeting that China’s issues and threats must be tackled in the context of the country’s strategic needs. He also emphasised the importance of stabilising the agricultural sector and ensuring the country’s food security, calling for more stringent measures to ensure stable agricultural production and supply, as well as sustained growth in the industry and rural areas. He was quoted by state broadcaster CCTV as saying, “The food of the Chinese people must be manufactured by and remain in the hands of the Chinese.”

Similarly, the Central Rural Work Conference, convened by Xi and attended by officials from agricultural and rural authorities from across the country, underlined the need for food security, self-sufficiency, and rural regeneration. Agricultural and rural development plans and responsibilities connected to “the three rurals” (agriculture, rural areas, and farmers) are normally put forth at the Central Rural Work conference for the coming year. The State Council, China’s cabinet, publishes the yearly rural policy paper that arises from the rural work conferences, known as the “No. 1 document.” It is usually the Chinese central government’s first policy paper released at the start of each year, months after the conference. The rural policy document for this year has yet to be released.

Food security will almost certainly remain a top priority, as it is necessary for societal stability and has been openly connected to China’s national security by Xi. One of the six guarantees made in April 2020 in response to COVID-19 and developments in global agricultural supply systems is food security. Recent public statements from China’s top officials suggest that the importance of food security has not lessened and that a stronger push to ensure food security will continue in 2022 and beyond.

China has been hoarding grains like there’s no tomorrow

China is engaging in some massive hoarding of food grains. Less than 20% of the world’s population has managed to stockpile more than half of the globe’s maize and other grains, and China is leading the crusade in establishing this hegemonic food disparity. According to data from the US Department of Agriculture, China is expected to have 69% of the globe’s maize reserves in the first half of the crop year 2022, 60% of its rice and 51% of its wheat.

According to Qin Yuyun, head of grain reserves at China’s National Food and Strategic Reserves Administration, “Our wheat stockpiles can meet the demand for one and a half years. There is no problem whatsoever about the supply of food.” He proudly proclaimed that China was maintaining its food stockpiles at a “historically high level.” According to the General Administration of Customs of China, the communist nation spent $98.1 billion importing food in 2020, which is 4.6 times higher than the figure 10 years ago.

Nobody wants to be a farmer in China. The soil is turning toxic, returns are low and crop yields hardly make agriculture a viable career option for Chinese citizens. Additionally, people from rural China are migrating to urban centres in search of better livelihoods. China’s production of wheat and other provisions as well as the amount of land used for agriculture plateaued in 2015.

Also read: China’s dams are bursting. A city of 10 million could be washed away. And a severe food crisis is almost here

China can no longer domestically produce food to fulfil the country’s growing demands. To make matters worse, Chinese citizens now want high-quality food products, and the one thing we know about China is this — it cannot produce high-quality goods, leave alone food. Everything in China is of cheap quality. So, in order to mitigate its food crisis, China is importing large amounts of food grains, hoarding them, and pushing global prices over the roof.

We at TFIglobal were the first news team from around the world to tell you that China was reeling under an intense food crisis. In November itself, we told you how the Chinese government had issued a new directive — asking citizens to store as much food as they can. The Xi Jinping administration is also looking to cut the amount of food wasted in Chinese households. Vegetable prices in China have soared, and one needs to be no less than affluent to afford vegetables in the country now.

The Chinese regime has lost the plot. China’s agricultural land is turning barren, and the world might soon stop exporting food to China.