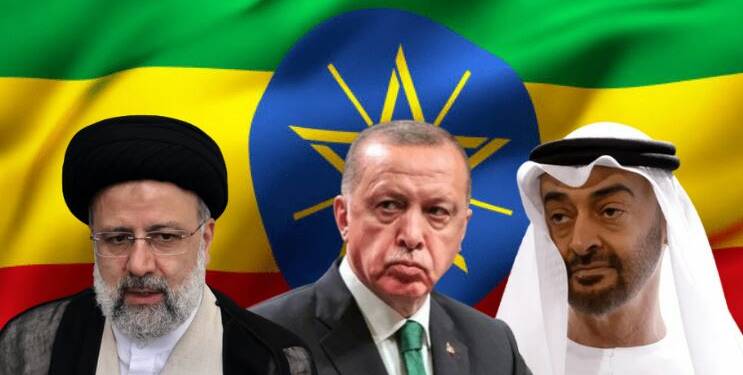 The developments in Ethiopia since the last year has been a very interesting case for anyone who wants to study geopolitics in full flow. While the government forces in the country have succeeded in making sure that the civil war is contained and ended, there is an interesting dynamic that has not been entirely discussed. Ethiopia has followed the most realist approach, in the face of stringent sanctions by the Biden administration.

Faced with isolation and an overtly expansive TPLF (Tigray People’s Liberation Front), Ethiopia took the support of any and every power that was willing to help in its fight against the secessionist forces. The crisis has thrown up many geopolitical shocks, but one of the most significant among them is the reported deployment of drones and weapons supplied by many competing nations, who appear to have decided on their support for Ethiopia’s government.

Every power that is supporting the Ethiopian government is doing it for its own benefit. However, the interesting bit is the fact that all these powers which otherwise have competing interests, somehow have found a common cause in supporting the government of Idi Amin. Among these countries are the UAE, Turkey and Iran — which most certainly are not allies.

Geopolitical interests of the UAE

The United Arab Emirates (UAE) has been involved in the Ethiopian conflict since the very beginning. The rebel Tigray People’s Liberation Front (TPLF) had accused Abu Dhabi of deploying drones stationed at its Assab military facility in Eritrea to target Tigrayan forces in November 2020. An Emirati air bridge assisting the Ethiopian government was monitored after the Ethiopian withdrawal in the face of advancing Tigrayan forces in the summer of 2021. Between September and November 2021, more than 90 flights between the two nations were scheduled.

The United Arab Emirates played a pivotal role in the recent conflict in Ethiopia. The UAE stood at loggerheads with the United States, which wanted to let the African nation burn. But Abu Dhabi insisted that the conflict be fought decisively and that the TPLF be defeated. To that end, it provided Ethiopia with armed drones, which went on to become the single most important reason for Tigrayan forces to retreat with their tails between their legs.

UAE’s intervention was part of a larger plan to create an allied political and security structure between the Red Sea and the Horn of Africa, which began with Houthi successes around Bab al-Mandab at the start of Yemen’s conflict.

The appointment of Abiy Ahmed as Ethiopia’s prime minister in 2018 intensified a partnership between Addis Ababa and Abu Dhabi. In the same year, the UAE-sponsored Eritrean-Ethiopia peace deal committed three billion dollars to the Ethiopian treasury and made significant investments in many areas.  UAE has invested so much in Ethiopia and hence is not ready to see the very country enter an era of never-ending civil war, thereby jeopardizing its interest in maintaining influence over the Red Sea.

Turkey’s weapon sales in Africa: Ethiopia as the gateway

The visit of Ethiopia’s prime minister to Ankara in August 2021 marked a watershed moment in the two nations’ relationship, which had been estranged as Ethiopia’s ties with the UAE-Saudi axis grew stronger. A package of agreements, including “military cooperation,” was signed during the visit. Turkish military exports to Ethiopia grew from $234,000 in 2020 to roughly $95 million in 2021, according to the Turkish Defence Industries Corporation.

Although the Turkish embassy in Addis Ababa denied in July 2021 that it had delivered drones to Addis Ababa, allegations surfaced after Ahmed’s visit to Ankara alleging the use of Bayraktar TB2 drones in military operations in Ethiopia’s conflict, which neither party refuted this time. In reality, Turkey saw drone support for Ethiopia’s government as a strategic advantage, enhancing its reputation in the African military and security sector after proving its worth in an African war zone, where demand for this type of weapon is booming.

Ankara’s engagement also suggests that Turkish construction firms could contribute significantly to the rehabilitation of infrastructure in war-torn areas. Preventing Ethiopia from devolving into civil war safeguards Ankara’s substantial investments in the country. It also guarantees that the resulting anarchy does not spread to Somalia, the most important centre of Turkish influence on the African continent.

Iran: the country ready to support anyone that is being opposed by the West

Debretsion Gebremichael, the commander of the Ethiopian People’s Liberation Front (TPLF), accused Iran, the United Arab Emirates, and Turkey of giving the Ethiopian army weapons, including drones, in a letter to UN Secretary-General Antonio Guterres on December 7, 2021. Prior to that, the US government accused Iran’s Islamic Revolutionary Guard Corps Quds Force (IRGC-QF) of supplying drones to Ethiopia, and the US Treasury Department slapped penalties on October 29, 2021.

Iranian drones have been spotted in Ethiopia, according to investigative websites, and 15 flights from two IRGC-linked airlines have been tracked from Iran to Ethiopia’s Harar Meda military facility. This amount of Iranian involvement underscores the strategic importance of Ethiopia for Tehran, as well as Iran’s determination to participate in Africa’s booming military and security sector.

The most important prize for Tehran is a return to Ethiopia, which is located near Yemen, the Arabian Peninsula, and the Horn of Africa, after losing influence in recent years with allies Eritrea and Sudan due to Emirati-Saudi pressure, as well as the overthrow of Omar al-regime Bashir’s in Khartoum following popular protests.

In the end, all three powers are attempting to take advantage of Ethiopia’s weakness in order to expand or solidify their dominance.