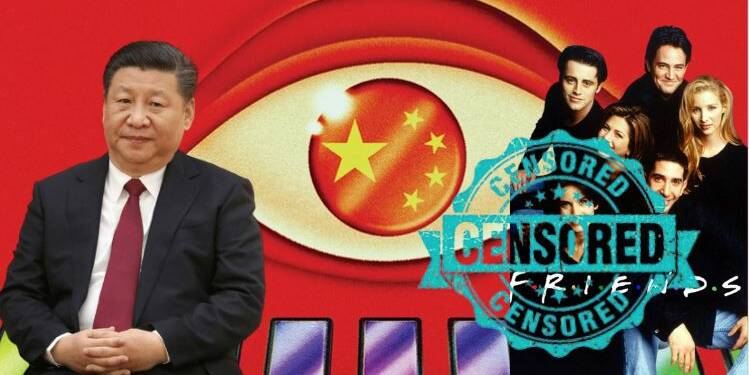 ‘Friends’, the 1990s super-hit American comedy show, started streaming again on China’s major video platforms last week. The show is madly popular in China. ‘Friends’ was first aired legally in China in 2012; however, a generation of Chinese millennials was already well-acquainted with the show.

Subtitled pirated copies were widely available in China way before 2012. The show disappeared from the Chinese internet in 2013 after the streamers failed to renew the licensing deal with the American producers.

Now, the show made a grand comeback in 2022. The people were equally excited and thrilled about the show. But no one expected their excitement would soon turn into vehement anger against the Chinese government.

People noticed that the new version of the American sitcom was heavily censored, including the removal of lesbian, gay, bisexual and trans-related content.

In one example, a conversation where the main character, Ross, explained his wife was a lesbian, was removed. Another scene where another character, Joey, suggested going to a “strip joint” was translated as “go out to play” on the new version.

Other scenes involving mentions of sex or LGBTQ situations were altered via adjustments to the Chinese subtitles. In one scene where the show’s six friends — Jennifer Aniston, Courteney Cox, Lisa Kudrow, Matt LeBlanc, Matthew Perry and Schwimmer — are debating the advantages of men vs women, Ross mentions that “[Women can have] multiple orgasms.”

Interestingly, in the new Chinese version, the subtitles were changed to: “Women have endless gossip.” In other snippets of dialogue, the word “lesbian” was replaced with the Chinese word for “ex-wife.”

The altered version frustrated the Chinese audience immensely, forcing them to take to Chinese social media and vent their anger out against the communist party without mincing their words.

One user on China’s Twitter-like Weibo stated, “I resolutely boycott the castrated version of ‘Friends’,”. “This is a defiling a classic,” said another. A third user said, “if you can’t show the complete version under the current atmoshphere, then don’t import it.”

The discussion soon became a hot search topic on Weibo, prompting Chinese censors to censor the #Friendshasbeencensored keyword. The hashtag had received over 60 million views before it was removed over the weekend, with search results instead leading to the message, “this topic is not shown according to relevant laws and regulations.”

Why is China going after LGBTQ community?

Censorship in China on both small and large screens has undergone considerable tightening over the last decade under Xi Jinping’s tenure. Chinese censors, over the past months, have placed special emphasis on banning the LGBTQ content citing the rise of “effeminacy” among Chinese males.

In 2018, Chinese state media Xinhua had published an editorial condemning the portrayal of softer masculinity in the Chinese media and entertainment sector. Xinhua had said that “sissy pants” or “little fresh meats” are hurting China’s global image.

Three years later, the Chinese Communist Party has now banned the effete men from being broadcasted on TV and asked its media to promote “revolutionary culture,” broadening a campaign to tighten control over business and society and enforce official morality. Broadcasters must “resolutely put an end to sissy men and other abnormal esthetics,” the TV regulator had recently said, using an insulting slang term for effeminate men — “Niang pao,” or literally, “girlie guns.”

Make no mistake, China had decriminalized homosexuality in 1997 itself. But radical Han Chinese have always demanded to rein in the spread of gay content on Chinese social media. Now, Xi Jinping appears to bring their fascination to reality, by tightening censorship on the platforms mainly popular among China’s LGBT community.

Last June, it was reported that WeChat had banned various accounts run by University gay students. Many of the closed WeChat accounts display messages saying that they had “violated” Internet regulations, without giving further details.

LGBT community is already fuming at rampant censorship by the Jinping administration. And now, altering the LGBT content has sparked fury among the millions of loyal Chinese fans of the American Sitcom. Anyways, Jinping’s rivals are nowadays looking for opportunities to fuel anti-Jinping campaigns on the Chinese internet, and now this ‘Friends episode’ has further piled up more pressure on the outgoing Jinping regime.