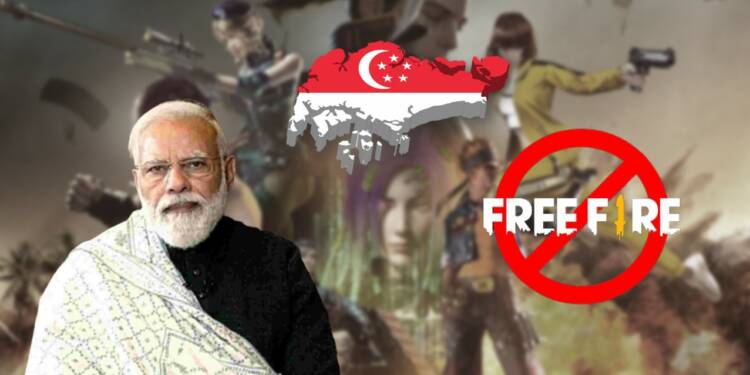 India recently banned 54 Chinese apps citing threats to its national security. Interestingly, the ban also set the stocks of a Singaporean company on fire. It was the first time that Beijing was not alone in facing the music, Singapore did feel the jolt too. Singaporean tech giant Sea group lost $16 billion in a single day. Sea’s New York stock plunged more than 18% overnight.

New Delhi had also banned “Free Fire” in this week’s crackdown on Chinese applications, which is one of the most lucrative titles for the Sea group. The ban on ‘Free Fire’ marked a radical change in India’s Chinese-App-ban policy. It was the first time that India expanded its policy to a non-Chinese company citing overwhelming Chinese investments.

The ban took the management of the Sea group by surprise. Sea is not a Chinese company. The company’s founder Forrest Li was born in China, but today he is a Singaporean citizen. The company is listed on New York Stock exchange. No direct Chinese connection so far, right? But New Delhi still put the app on the blacklist since a large chunk of the stakes in the company is held by Chinese investors.

For instance, Chinese tech giant Tencent held 23.3% voting rights in the Singaporean firm last March. Sea’s founder and CEO Forrest Li, along with Tencent, collectively hold 52% of the total voting power. New Delhi realized that even if the company was not registered in China, it had ample Chinese connections to justify the ban on ‘Free Fire.’

You see, India’s position in the global tech market is quite unique and pivotal for emerging start-ups across Southeast Asia. China is no longer an attractive market for sprawling tech giants of the region, and now they are flocking to red-hot Indian markets for offsetting the losses. Take Free Fire for example. The Free Fire game was the highest-grossing mobile game in India in the third quarter of 2021.

And now the Sea group fears that India’s app ban could even extend to its other services being offered in India. For instance, Sea’s e-commerce business arm Shopee also stands a chance of inviting New Delhi’s wrath. Investors are worried, and that’s why they are impulsively pulling out their money from the Singaporean company. Simply put, the company is paying through the nose for having Chinese money parked in their equity.

Here, by banning the Sea group’s Free Fire, New Delhi has sent a message to all aspiring tech giants of the world. Stay away from Chinese investors; dump Chinese Yuan; before eying Indian markets. Anything Chinese is a national security threat in India. You get Chinese investors on board, and you will immediately be banned from entering the Indian market. You set foot in two boats and expect to sail. You choose either China or India. And if you care for your business, you must already be sending Chinese investors packing home!

Ironically, even the Sea group had realized this truth way back. The company was already making arrangements to cut Tencent’s voting share down to less than 10%. On the flip side, the CEO of the company would take control of 60% of the total voting rights. But sadly, the company got caught in the crosshairs before it could get rid of the investments made by Tencent. For Southeast Asian tech giants and start-ups, it’s time to act and dump Chinese investments or New Delhi won’t even blink an eye before flattening their business empires in no time.