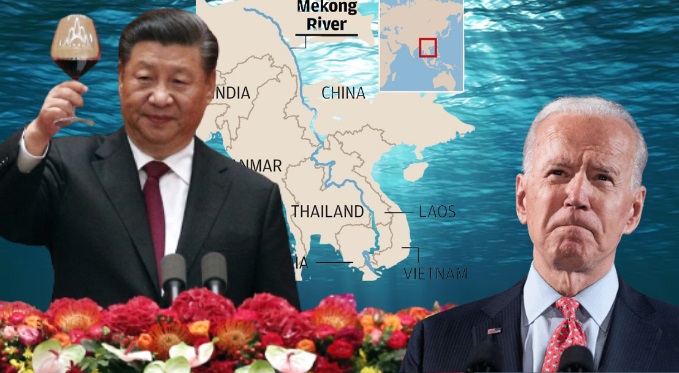 Experts from an America-funded think tank has now suggested that the Mekong basin nations must pay China cash before asking Beijing for more water to release from its mighty dams.

The Mekong River is the longest in Southeast Asia, which transverses through China, Myanmar, Thailand, Laos, Cambodia and Vietnam. The five Southeast Asian nations allege that China has been siphoning off their share of water supplies for decades.

Their allegations are not unfounded given China’s wild appetite for building mega-dams upstream. China operates 129 dams, out of which 11 are extraordinarily huge. Only two Chinese dams on the Mekong hold about 10 billion cubic km of water during the wet season to produce hydroelectricity during the dry season.

These mega-dams have nearly dried waters in lower basin countries, prompting the lower basin nations to pile up more pressure on China. But now, China’s friends in the US have asked them to fill the coffers of the communist nation before expecting any respite.

US experts present an embarrassing offer

Brian Eyler, co-leader of the Washington think-tank Mekong Dam Monitor, said, “For better or worse, these large dams were built in China. They’re there for a reason. There’s a profit motive behind them … and when you ask somebody to stop doing that, you’ve got to give something in return.”

Another official at the Mekong Dam Monitor, Alan Basist, suggested that all basin nations should jointly build a fund to fund China for releasing waters from its mega-dams.

Basist said, “For example, the insurance industry goes to China and says we will pay you to release the water. We know that you will lose money because you cannot sell the energy during the dry season.”

Through this offer, Washington DC has shamefully attempted to legitimize China’s brazen larceny of the Mekong’s waters that actually belong to lower basin nations. The US experts are shoving China’s propaganda down the throat of these nations that they are practically living at China’s mercy and they should not expect the US to come to their rescue.

Make no mistake, the Mekong Dam Monitor project, partly funded by the US government, had started its operations during the Trump administration in 2020. The project was kickstarted to help these small nations, and not to make them feel helpless or hold them to ransom. It was supposed to act as a guide to how much natural flows have been disrupted by the influence of the Chinese dams.

Biden leaves the US allies to fend for themselves

But under the Biden administration, the project is being misused to pitch China’s agenda and threaten them with ramifications unless they bootlick the Jinping regime. The new administration has failed to back American allies in Southeast Asia; instead, it has now left them in the lurch.

The Mekong River can be termed as a lifeline for Southeast Asia’s economy. About 80 per cent of the 12 million households in these agrarian economies are directly dependent upon the Mekong River for their survival. Fish and rice form a part of the staple diet of the people in these countries.

Read More: ‘China has been hiding its Mekong dams and its “orchestrated” use from the world till now, but they have been exposed’

The word the Mekong itself is a shortened form of Mae Nam Khong. Mae Nam translates to ‘mother of waters’ and Khong refers to the river. By controlling the flow of Mekong, China is robbing these countries of their fish, rice, and water.

The offer by the US experts to these Mekong basin nations is an embarrassment for the United States. This is a smoking gun that proves the US’s surrender before China in Southeast Asia. Donald Trump made endless efforts to build the USA’s alliances worldwide to form a joint front against China. Biden is now shamefully dismantling USA’s alliances by punishing one ally after another!