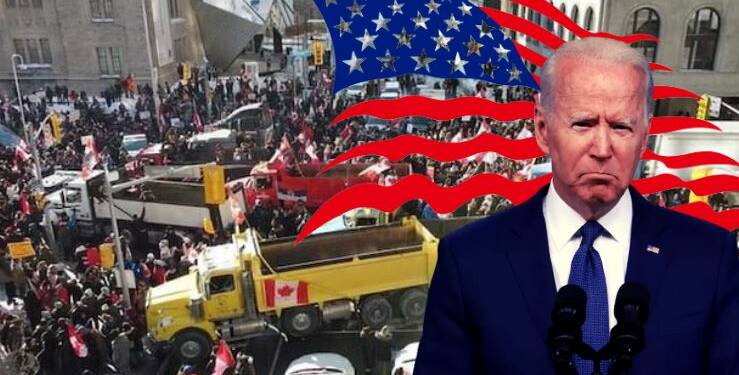 After spreading to countries across the world, the Freedom Convoy is now headed towards the US. It all started with Canada, went to New Zealand, Australia, Israel, UK, France and now its Washington DC’s turn to face the wrath of the freedom convey.

Bob Bolus, one of the protesters who will be taking part in the rally said, “The protesters main gripe was vaccine mandates, and to make the US government ditch those, the Convoy planned to ‘circle Washington DC’ much like a ‘giant boa constrictor,’ which, as he put it, squeezes you, chokes you, and then swallows you”. The activist went on to warn “that’s what we’re going to do to Washington DC”. The truckers, who are planning to march towards the White House, have named their movement the ‘Great American Patriot Project’. They are aiming for the Capital Beltway that surrounds Washington.

Also Read: Freedom Convoy arrives in New Zealand as Jacinda struggles to find her own “bunker”

Bolus also said that the truckers would leave one lane clear for emergency services. He stressed that the Freedom Convoy would not compromise anybody’s safety or health. The arrival of the truckers could coincide with Joe Biden’s State of the Union address to the Congress on March 1.

The Great American Patriot Project is composed of several grassroots groups from across the US, with hundreds of trucks heading for the US capital. The truckers have been inspired by the Freedom Convoy protest in Canada.

The message the truckers intend to deliver is that the “government has forgotten its place and its mask and vaccination mandates are unconstitutional,” said the co-organizer, Maureen Steele, adding that the convoy is a planned, peaceful and unified transcontinental movement. “With the advent of the vaccine and workable therapeutic agents, along with the hard work of so many sectors that contributed to declining COVID-19 cases and severity of illness, it is now time to re-open the country,” said Steele.

The convoy with approximately 1,000 trucks will be the backbone of other convoys joining it from the Pacific Northwest, the American southeast and other parts of the country. The convoy is being assisted by retired military personnel and security experts, spearheading logistics to ensure a safe, lawful and peaceful journey.

Read More: Trudeau has a plan to punish every single person who was connected to the Freedom Convoy

It would be interesting to see the results of this protest rally. The Biden administration will now be facing a revolt against its failed domestic policies and decisions. Moreover, what needs to be seen is that, to counter the protests, will the White House deploy the same tactics as that of its northern neighbor Canada?