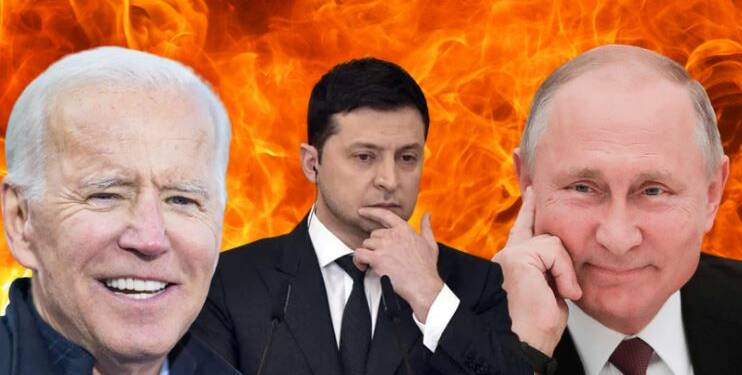 The situation on the Russia-Ukraine borders has been simmering for quite some time. Under the leadership of Donald Trump, the US was mostly involved in the Indo-pacific, which led to the stabilisation of the situation in Eastern Europe. However, since coming to office, Joe Biden has consistently pushed Ukraine to take an overtly anti-Russia stance. Not only that, making the worst possible geopolitical move, he has single-handedly steered the US foreign policy away from Indo-Pacific and back to the, now redundant, cold war dynamics.

Since Joe Biden took office last year, we have been consistently reporting on how he is trying to create a cold war-like situation with Russia for maintaining its sway over the European continent, NATO from falling out among other things. Last year, back in February, not even a month after taking office, the Biden administration deployed long-range B-1 bombers in Norway. It was followed by assistance packages to Ukraine and small yet coordinated steps to increase the temperatures in Eastern Europe. Year-long, on the one hand, while Joe Biden provided assistance to Ukraine, on the other hand, he kept promising President of Ukraine, Volodymyr Zelenskyy about total support in case of any untoward escalations.

However, when the push came to shove, Joe Biden is doing what he does the best, abandon his ally while making grand statements.

Joe Biden has made no secret of his deep love for NATO and mindless anti-Russia activism. Biden’s aims from the very first day have been those of making NATO stronger than ever before and ensuring that Russia kneels before the formidable ‘Western’ alliance. This cold war rhetoric and subsequent promises encouraged Ukrainian President Volodymyr Zelensky to take multiple anti-Moscow steps and also crackdown on pro-Russia sentiments in the country.

Also read: Biden decides to arm Ukraine’s militias and turn it into the next Afghanistan

High on these sentiments, the Ukrainian ambassador to Germany Andriy Melnyk, in April last year said, “Either we are part of an alliance like NATO and contribute in this way to making Europe stronger … or we are left with the other option, which is to arm ourselves.”

The US has time and again assured Ukraine of its accession into NATO, but without any concrete timeline. The US has always talked about defending Ukraine in any event of military aggression, but as one can clearly see, it did not come to Ukraine’s rescue when it is faced with an all-out assault. Joe Biden’s modus operandi is this: stoke tensions between Ukraine and Russia, and when Moscow prepares its defences and plans for an offensive, leave Kyiv to fend for itself.

Joe Biden abandoned Ukraine, right when it needed help the most

All the steps since last year emboldened Zelensky to nurture the ambitions of getting out of the Russian sphere of influence. Backed by all the promises made by Joe Biden, the Ukrainian leadership kept considering joining the western block entirely. However, this is common knowledge that Russia and Vladimir Putin consider Ukraine as the red line when it comes to NATO and the western alliance.

Read more: “Ukraine will cease to exist” and it is Biden’s fault

Ukraine’s geographical location makes it highly dangerous for Russia to see it as part of NATO. Having NATO weaponry in and around Kyiv will make Moscow geopolitically vulnerable and this is why Putin has time and again reiterated Russia’s position vis a vis Ukraine. However, the Biden administration has kept propping up the Ukrainian leadership against Russia and escalating the situation in Eastern Europe by warmongering statements.

However, now as war has broken out in Eastern Europe and Russian forces have invaded Ukraine, Joe Biden is only giving statements and announcing sanctions. Joe Biden – in the initial stages of the Russian onslaught, said he and his wife were “praying” for Ukraine and its people. He is doing everything, but coming to the rescue of Ukraine. He singlehandedly pushed Ukraine into a conflict that had been relatively stabilised before his Presidency. And now, all he is doing is making statements, and expressing shallow sympathies.