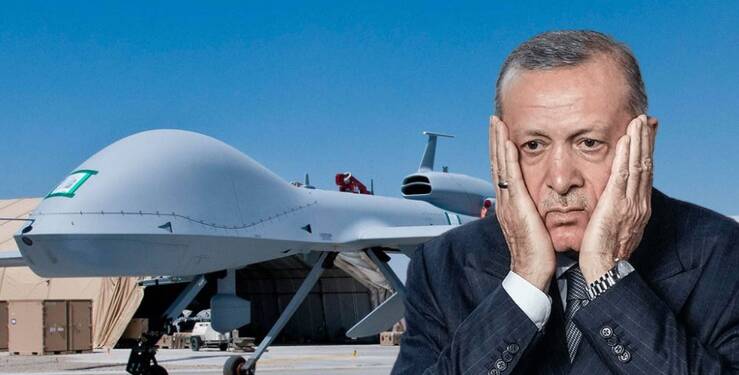 Turkey’s economy is in shambles, and this was one of the geopolitical facts that need to be considered while picturising the whole geopolitical scenario. Russia and Ukraine are at war. And there is a huge build-up regarding what may be about to happen. Some say the war is going to continue for several days and others feel that other powers might get roped in. However, one unintended casualty of this war is Turkey’s weapons industry and Erdogan’s ambitions to utilise weapons sales to save its economy.

At the centre of this policy was the sale of Turkey’s famed “Bayraktar Drones”, which gained international popularity due to the success in the Armenia-Azerbaijan war. However, on Twitter, the Luhansk People’s Republic, which was recently recognised by Russian President Vladimir Putin alongside the Donetsk People’s Republic, said that two Bayraktar TB2 drones had been shot down near Schastia.

These two breakaway regions of Ukraine have been fighting Kyiv’s troops even before Russia began an invasion. In an attempt to degrade Ukraine’s defence, Russian forces launched standoff missile attacks against command and control facilities, air defence installations, airbases, and other important targets. Russia broke into Ukraine’s territory north of Kyiv, according to border guards, and launched Grad multi-barrel rockets against government positions.

Byraktar drones were the last hope for Turkey’s economy

Lower interest rates, according to Turkish President Recep Tayyip Erdogan, will be very advantageous to his country’s economy, however, all the statistics are telling something else. With the economic fortunes dwindling, Erdogan is losing support even among the most vehement supporters. In such a situation, the only hope to revive the Turkish economy was the lustre of Turkey’s arms exports industry. This hope was further catalysed by the increased interest of African countries in buying Turkey’s arms, its attack drone Bayraktar TB2 among others.

While in the face of arms push by Israel, Egypt, and Russia in the African continent, the prospects were already on a downward spiral, the latest failure of these drones to achieve any substantial objectives from the side of Ukraine means that Turkey’s celebrated drones have turned out to be a no show and thereby cannot salvage the dead economy.

This has decreased the prospects of an increase in the orders for these drones in the African continent which was increasingly considering this so-called masterpiece.

The two-day Turkey-Africa partnership summit, which begins on Friday, follows a high-level business roundtable on investment and trade in October. Leaders and top ministers from 39 nations have confirmed their presence, including 13 presidents, with Erdogan slated to deliver a speech on Saturday.

Ankara already has a military facility in Somalia, while Morocco and Tunisia received their first deliveries of Turkish combat drones in September, according to reports. During Erdogan’s first visit to Angola in October, the country became the latest to exhibit interest in unmanned aerial vehicles (UAVs).

According to reports, Turkey has established a network of 37 military offices across Africa, in keeping with Erdogan’s stated objective of increasing yearly trade volume with the continent to $75 billion in the coming years. However, all these efforts were collectively being countered by countries like Russia, Israel and Egypt. Now, with the absolute failure of these drones in the current Ukraine-Russia crisis, the fortunes of Turkey’s weapons industry has died an early death.