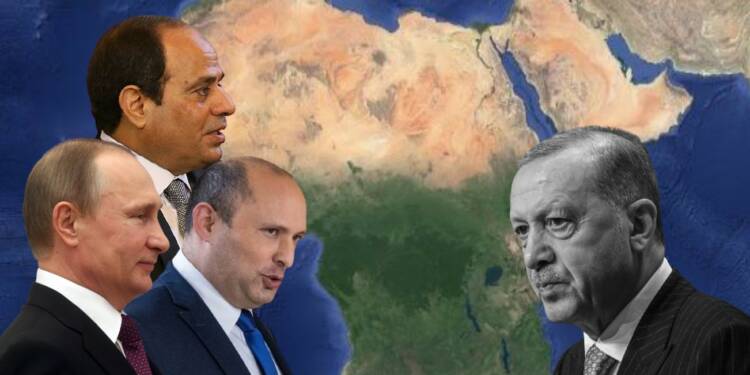 Turkey’s currency Lira entered a free-fall zone on Friday, with the Borsa Istanbul 100 index extending declines to a new low. In comparison to the US dollar, it has lost more than half of its value, and annual inflation last month reached 21.3 percent. Lower interest rates, according to Turkish President Recep Tayyip Erdogan, will be very advantageous to his country’s economy, however, all the statistics are telling something else. With the economic fortunes dwindling, Erdogan is losing support even among the most vehement supporters. In such a situation, the only hope to revive the Turkish economy was the lustre of Turkey’s arms exports industry. This hope was further catalysed by the increased interest of African countries in buying Turkey’s arms, its attack drone Bayraktar TB2 among others. However, even this possibility is fading in the face of arms push by Israel, Egypt, and Russia in the African continent.

Read more: Turkey shuts down its own markets as Lira enters freefall

For the first time, both sides decided to localise Egypt’s arms industry technology in Kenya, as well as to promote Kenyan defence and civic industries. Terras stated that the organisation will use all of its expertise, human, and technological know-how to work with Kenya cooperatively and collaboratively.

Egypt’s efforts to work with Kenya aren’t only confined to the military. During a press conference on Dec. 5, Alaa al-Wakeel, the head of the Africa Committee and a member of the Export Council for Food Industries’ Board of Directors, announced that the council is planning a trade mission to Kenya in January. Egypt wants to improve industrial collaboration with Kenya and develop economic relations between the two nations, according to Maj. Gen. Mohamed al-Zallat, the chairman of the Industrial Development Authority.

Read more: Egypt sweeps in to save Ethiopia from American aggression

The two-day Turkey-Africa partnership summit, which begins on Friday, follows a high-level business roundtable on investment and trade in October. Leaders and top ministers from 39 nations have confirmed their presence, including 13 presidents, with Erdogan slated to deliver a speech on Saturday.

Ankara already has a military facility in Somalia, while Morocco and Tunisia received their first deliveries of Turkish combat drones in September, according to reports. During Erdogan’s first visit to Angola in October, the country became the latest to exhibit interest in unmanned aerial vehicles (UAVs).

According to reports, Turkey has established a network of 37 military offices across Africa, in keeping with Erdogan’s stated objective of increasing yearly trade volume with the continent to $75 billion in the coming years.

However, these ambitious deals are looking at an early failure. As if the Egyptian actions were not enough, Russia and Israel too have stepped up their engagement in the continent.

Morocco and Israel are planning to develop two unmanned aircraft factories in the Al-Aoula region of the North African country, according to media reports. Moroccan and Israeli officials informed Shephard Media that the two factories were built in compliance with a security cooperation agreement inked by the two countries on November 24.

Bluebird Aero System is owned in part by Israel Aerospace Industries, and its board is chaired by former Israeli Defence Minister Amir Peretz. This will revolutionize the regional supply and demand of drones. And given the technological prowess Israel enjoys, this is not good news for Turkey’s ambitions.

Between 2016 and 2020, Africa accounted for 18 percent of all Russian arms transfers, according to the Stockholm International Peace Research Institute, with Algeria being the top recipient. Aside from military hardware, the agreements include measures for counterterrorism and collaborative soldier training.

To top it all off, Russia has also strengthened its bilateral relations with Egypt. Russia has pursued a strategic course, keeping tight bilateral ties with Egypt, and moving forward with the establishment of a Russian industrial zone in Egypt. Russia and Egypt reached an intergovernmental agreement in 2018 to establish a special zone east of Port Said with a streamlined tax structure for Russian resident businesses.

All these efforts by the Russian and Egyptian governments, coupled with an increasing understanding between Israel and Russia, things are looking grim for Erdogan. His ambitions of turning Ankara’s arms exports to the African countries as a solution for soaring up its economic statistics are becoming bleaker by the day.