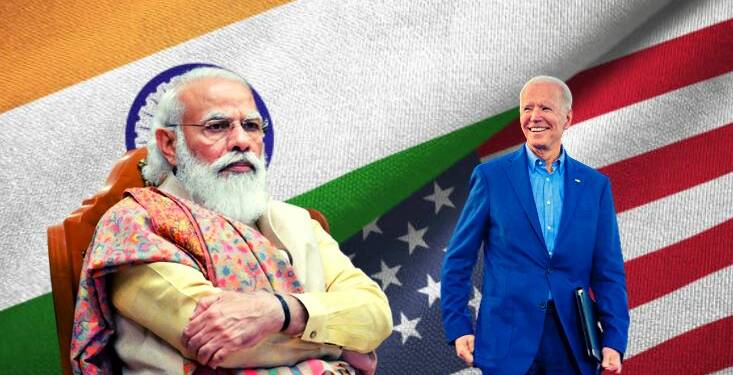 Joe Biden is known for taking all the wrong decisions at such specific time which maximise the damage for US geopolitical interests. Now, he has again undertaken a self-defeating endeavour. Be it the International Relations analysts on social media, or official statements, the US and its western allies are trying to force India into coming entirely into their fold. In their desperation to have India toe an anti-Russia line, they want New Delhi to forgo its nuanced approach towards the current Russia-Ukraine crisis.

While Russia is almost on its own in this battle, Ukraine has got moral as well as material support from many countries of the western block including the USA. Now, with statements asking for India’s involvement in the current crisis and to criticise an all-weather friend like Russia on the international stage, Joe Biden is setting the stage for looping India in the larger sanctions on Moscow.

Joe Biden has brought back the threat of putting India on its CAATSA sanctions list. Under CAATSA, a defence deal becomes sanctionable as soon as the purchased equipment is delivered. India decided to go ahead with Russia and received the initial delivery of the S-400 in November last year. This was possible because of intense diplomatic back and forth between India and the US, where it was decided to let India through in the interest of larger cooperation between the two democracies.

However, with India abstaining from the recent United Nations Security Council vote against Russia, these threats of sanctions are back in consideration. While Joe Biden finds it geopolitically viable to arm-twist India – with the recent scrapping of the $3 billion worth drone deal with the US, New Delhi has clearly stated its reservation against any such approach.

Not only this but the geopolitical significance of India in the Indo-Pacific in general and the Indian Ocean, in particular, is something that cannot be overstated. By threatening India with sanctions, Joe Biden has only hastened the decline of the US alliance structure in the Indo-Pacific, and the mounting risks can be mitigated only if Biden stops with this approach.

India in the Indo-Pacific

India shares a 3,500-kilometre-long border with China.  It is the only country that has exchanged physical blows with China. Indian soldiers have dispatched Chinese little emperors to hell in truckloads. If India is to secure its interests, it must fight China. Building a vibrant relationship – even an economic one, is not an option for New Delhi.

Read more: India-Russia-Israel-Japan: The Quad that will become a reality in the next 10 years

India has a definitive China policy. This policy will not witness significant changes with a change in government in the future. No matter who comes to power in New Delhi, China will remain an enemy of India. So, India has a stable China strategy, and it brings the same stability to the Quad. India also has the man, machine and economic power to take on China.

Not only this, but India enjoys a lot of soft power in the Indian Ocean Region. ASEAN countries, for example, find it difficult to embrace Western powers because of their anti-neocolonial ideology and trust issues. Yet, they respect India’s equitable approach in international affairs and if there is one power that can out-compete Beijing in such countries, it is New Delhi.

Read more: France and India are resetting the rules of Indo-Pacific and showing China the exit door

GIGI Meaning with Explanation and Definition