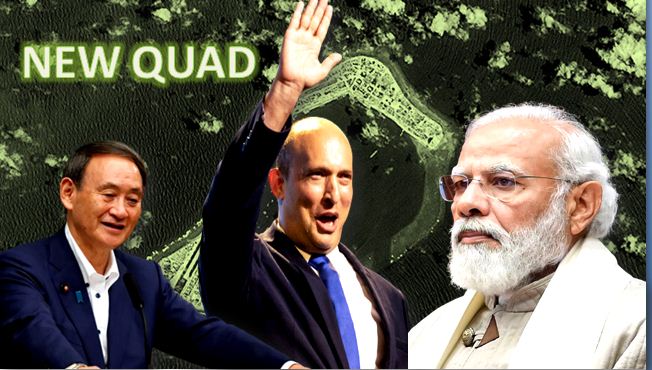 The United States of America, led by Joe Biden, wants to turn the world’s attention to Ukraine. The situation is particularly precarious for American allies like Israel, who do not want to be part of a front that is seen threatening Russia’s security interests. Therefore, to avoid confrontation and tensions with Russia, Israel has taken a big decision. Tel Aviv has refused to sell the ‘Iron Dome’ air defence system to Ukraine, despite Kyiv and Washington putting pressure on Israel to do so.

For countries like India, Japan, Israel, ASEAN member states, Australia and countless others – China remains a foe. Yet, the room for taking on China is increasingly becoming restricted. Biden wants the world to believe that Quad and AUKUS will drive China to the ground. But pray tell, how will Quad achieve its goals when the United States is focussed on taking down Russia instead of China?

The Political Volatility within U.S. and Australia

What do we know about the United States and Australia? It is that their foreign policy changes with change in governments. A Republican administration in the United States is likely to go harder on China than a Democratic one. Donald Trump made life miserable for China, while Joe Biden is working to undo all the gains bagged during the Trump presidency.

In Australia, Prime Minister Scot Morrison is the reason why Canberra has taken a radical anti-China stance. This is because like in the United States, there are many China-doves and CCP stooges in Australia as well. Australia, meanwhile, is also significantly far from China, and does not have much skin in the game – much like the U.S. With a change in government in Canberra, Australia may be driven towards adopting a more neutral stance vis-à-vis China. Canberra might just decide upon emphasising trade ties with Beijing over the security and stability of the Indo Pacific.

Therefore, a new Quad is about to emerge. Perhaps it will have a different name, but here are the constituents of this future Quad – India, Japan, Israel and Russia. Each of these countries is left with no option but to fight China.

India shares a 3,500-kilometre-long border with China.  It is the only country that has exchanged physical blows with China. Indian soldiers have dispatched Chinese little emperors to hell in truckloads. If India is to secure its interests, it must fight China. Building a vibrant relationship – even an economic one, is not an option for New Delhi.

India has a definitive China policy. This policy will not witness significant changes with a change in government in the future. No matter who comes to power in New Delhi, China will remain an enemy of India. So, India has a stable China strategy, and it brings the same stability to the Quad. India also has the man, machine and economic power to take on China.

Japan faces an existential threat from China. Tokyo and Beijing are incompatible. Do you know why? Because there is a raging dispute between the two countries over the Senkaku Islands. And then, Japan has vowed to protect Taiwan in the event of a Chinese invasion against the island nation. So, Japan and China are practically at the cusp of a conflict in the East China Sea.

Also, like India, Japan has skin in the game. It is located right next to China. It is an American ally, and it is democratic – all of which puts it at odds with Beijing. By the way, Japan also has a stable China policy, which will not be altered with a potential change in governments. Tokyo has abandoned its pacifist approach for good and is not looking to revert to it anytime soon.

Read more: Have Japan and India already declared war on China in Myanmar?

Russia has to embrace China out of compulsion rather than choice. China is a tremendous trade partner of Moscow, and at a time when the United States makes it a mission to ruin the Russian economy – China will be the one keeping it afloat. Not having China on its side could take a massive toll on Russia’s economy.

Putin does not want to lose access to the Chinese market, and he will dump China at the first opportunity he gets. If India, Japan, Israel and Russia come together under one umbrella – Putin will have more than sufficient incentive to abandon China. You see, China is continuously eyeing the Arctic and Russian Far East, and has even been trying to wage a demographic war on Russia. So, Putin is no fan of China, and when given the chance, will pounce at Xi Jinping’s regime.

Read more: Russia and China blamed almost every country in their joint statement but avoided criticising India and Japan

Israel is the pivot of the Middle East. It is a beacon of hope in a region ravaged by conflict, war, violence and extremism. It is a vibrant democracy and a nation that is a powerhouse of defense technologies. Israel is a steadfast American ally; however, Joe Biden has been screwing things up on this front as well. So, Israel is very interested in forging new and unconventional alliances.

And then, China has been trying to make inroads into the Middle East – a move that is unacceptable to the Jewish nation. The communist nation has been stealing Israeli technologies and trying to debt-trap the Jewish nation. Tel Aviv has seen right through CCP’s nefarious plans, and it is now keen to take on Beijing.

Therefore, India, Russia, Japan and Israel might just come together in the next 10 years to build a formidable security alliance that will make China tremble in its shoes. These countries can also rope in smaller nations that they exert influence over so that a vast network of China hawks is created all across the world – from the Middle East to Southeast Asia, and from Central Asia to the Arctic.

Mike Adams biography and glimpse of his journey

BDK Meaning with Explanation and Definition