Shinzo Abe sends out a stern message to China, but it’s meant for Biden 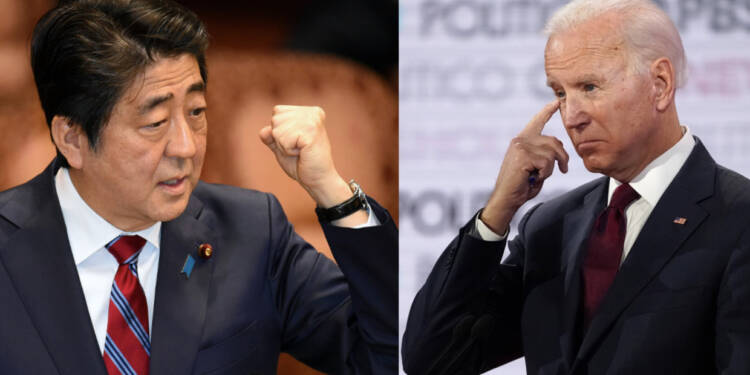 There are certain projects and issues which remain close to a leader’s heart even after they do not hold office. For Shinzo Abe, the issue of the sustenance of democracy in Taiwan and deterring any threat emanating from China are personal to him. One cannot understate the importance of each and every word spoken by the longest-running Prime Minister of Japan in post-war history. Abe-san, who stepped down in September 2020 due to health considerations, provoked a diplomatic row earlier this month when he said at a forum that a “Taiwan emergency” would be a crisis for Tokyo and the US-Japan alliance.

According to Kyodo News, Abe warned during a television broadcast on Monday that an attack on any American naval vessel that does assist “might be a situation posing a threat to Japan’s survival, allowing the exercise of collective self-defense.” While the earlier statements were targetted at Xi Jinping and the Chinese Communist Party, the elaboration on those statements comes just after Joe Biden publically humiliated Taiwan in the so-called Summit of Democracy, by cutting the Video Feed showing Taiwan Map.

The Biden administration’s flip-flops have been counter-productive for regional allies as they are not able to formulate a long-term policy. In this background, the timing of the statement makes it clear that the message was specifically meant for Joe Biden.

By inviting Taiwan, the US portrayed its commitment to defend democracies against communist tyranny. The US-made the ostentatious move to showcase its boldness; its challenge to the one-China policy; and its intention to call China’s bluff on Taiwan.

But when push came to shove on Friday, Taiwan was left in the lurch. Taiwanese ministers got censored, humiliated, and reproved. The minister got punished for speaking the truth and for calling out China’s barbarism. He got snubbed for labelling Taiwan as an open country. In a summit for democracies, an authoritarian China registered a flawless victory, at the behest of none other than Joe Biden himself.

Taiwan’s digital minister Audrey Tang appeared via video link to address the US-hosted summit on Friday. After Tang concluded her remarks, the moderator went to some other panelists. 20 minutes later, Tang was again asked to participate in the discussion, but startlingly, her video feed was cut off. She was only audible. Needless to mention, the map differentiating Taiwan from China was no longer visible.

These developments were enough to send a wave of joy in the decision-making echelons of the Chinese Communist Party. However, the joy must have been short-lived, given Shinzo Abe did not take time to reiterate his warning to Xi Jinping for the cost of any adventurism on Taiwan.

Abe stepped down as Prime Minister in 2020 after nearly eight years in office, although one should not forget that he still leads the ruling Liberal Democratic Party’s largest faction. On Tuesday, Abe gave a virtual address, in English, at a Taiwan-U.S.-Japan event hosted by the Prospect Foundation think tank in Taipei. Speaking after opening remarks by Taiwan’s President Tsai Ing-wen, Abe again called attention to the Island’s security.

“When there is a threat over Taiwan, and its democracy, it is a dire challenge to all of us, especially to Japan,” he said, linking the potential for cross-strait war to Tokyo’s own defense planning and the close relationship between the JSDF and U.S. forces. He also encouraged continued defense improvements in Japan, Taiwan, and the U.S.

He said that weakness breeds provocations and, therefore, Japan, Taiwan, and the US must make every effort to improve the collective capabilities in all areas, including underwater, sea surface, airspace, cyber, and outer space.

While these statements may seem as Abe’s direct warning to China, but, in reality, these messages are meant for Joe Biden to stay consistent with the larger policy choices of Taiwan and Japan if it wants to maintain the alliance structure in East Asia.

Kim Painter is a freelance health, wellness and lifestyle writer