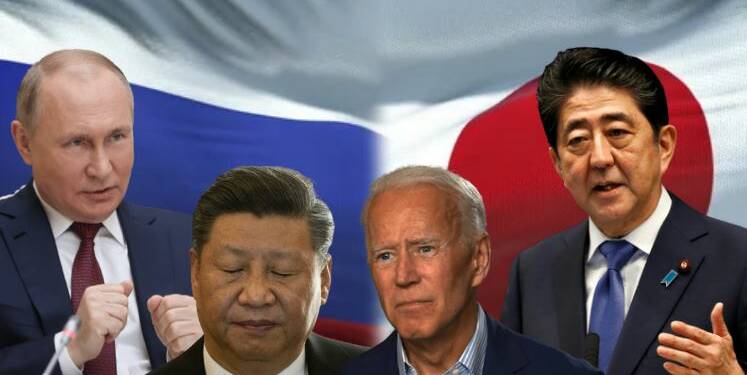 Russia seems to be pulling its troops back from Ukraine. Tensions remain at an all-time high across Eastern Europe, and Joe Biden ’s administration – which predicted an imminent invasion of Ukraine by Russia on February 16 has ended up with nothing but egg on its face.

The United States, NATO and its allies have all shifted focus to Russia, while China has been left off the hook. Even Japan has been pulled into the spiralling tensions of Eastern Europe, at a time when Tokyo and Moscow were working together to resolve their bilateral differences and form an alliance against China.

Yet, Joe Biden’s catastrophic foreign policy ended up bringing Russia and China closer than ever. You see, Russia has to embrace China out of compulsion rather than choice. China is a tremendous trade partner of Moscow, and at a time when the United States makes it a mission to ruin the Russian economy – China will be the one keeping it afloat.

Not having China on its side could take a massive toll on Russia’s economy, and therefore, a pragmatic Vladimir Putin swallowed his reservations and shook hands with Xi Jinping earlier this month.

In an interview with Japan Today, former Prime Minister Shinzo Abe recently said, “I think Japan should use diplomacy to sever the concerted efforts between China and Russia, and move ahead with improving its ties with Russia.”

Yes, Shinzo Abe actually said this! He called for increased Japanese diplomatic efforts with Moscow, which would help to undercut the growing Chinese influence in Russia. Shinzo Abe has made it pretty clear – Moscow’s growing ties with Beijing need to be severed, and Japan needs to play a big role in doing so.

You see, Shinzo Abe knows Vladimir Putin is forging an alliance with China out of compulsion. Putin does not want to lose access to the Chinese market, and Shinzo Abe knows this. So, the alternative that the former Japanese Prime Minister is offering is quite simple.

Rather than focussing on Ukraine, Japan needs to be much more worried about its immediate neighbourhood and stability therein. If China’s rise is not contained, and Beijing secures a friend of the size and scale of Russia – Japan’s security interests will end up taking a big hit.

Russia and Japan have been working to resolve their dispute over the Kuril Islands. They have also been keen at enhancing bilateral cooperation. The Ukraine crisis, however, reverted all the gains made in the past few months.

Once again, paying heed to Shinzo Abe’s advice, Tokyo needs to begin the process of making it known to Russia that it has a friend in the form of Japan.

Russia will dump China at the first opportunity it gets. Japan needs to ensure that it offers itself as an alternative to Russia. Moscow needs a strong economy by its side, and if it knows it has a friend like Japan, it would not need China. Putin will dump China without blinking an eye, and Tokyo will emerge as a formidable anchor of stability in the Indo Pacific.

Abe said, “But this was probably a mistake in terms of diplomatic strategy. The stability of the world community is maintained with the overwhelming military power of the United States, as well as the sense of danger, that there is no telling what sort of retaliation one would invite by doing something bad. The United States must never quickly make clear that ‘we won’t do anything’.”

Shinzo Abe is actually signalling to the current government in Tokyo that Joe Biden is not a man to be trusted. Therefore, Japan needs to form independent ties with Russia, and not let the Biden administration get in the way of the same. A Sino-Russian alliance needs to be prevented at all costs, and Japan needs to do all it can to ensure that Moscow and Beijing bonhomie ends soon.