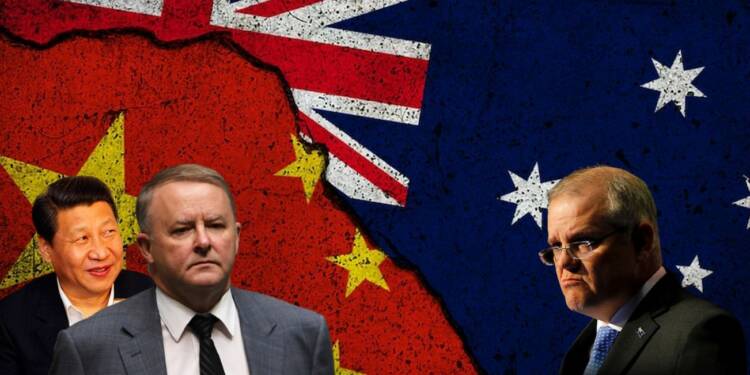 The Australian Labor Party is a dangerous entity. You see, Scott Morrison is not really at his strongest right now. In fact, it can be argued that he is at his weakest. The Australian government, led by a coalition, now has its primary vote diving to just 34 per cent. This is the first time that the Liberals are falling behind Australia’s Labor Party. The Coalition’s primary vote has slipped behind Labor, dropping from 39 to 34 per cent and putting Labor in a strong position to win the next election. The last time the Labor Party won an outright majority in Australia was in 2007.

The Labor Party is dangerous. It is pro-China, even if it is today claiming to be a party replete with China- and CCP-hawks. There is an umpteen number of labor leaders who are inclined towards the CCP. Some, like Victoria’s governor Daniel Andrews, are all-out CCP stooges who, if given the legroom, will sell Australia in its entirety to China. The only thing standing between such politicians and the CCP’s bed right now is Prime Minister Scott Morrison.

From paying scores of Victorian businesses to attend a big trade expo in China that was boycotted by the federal government, to openly defying Scott Morrison’s hawkish China policy, Victoria Governor Daniel Andrews has done it all. Andrews had been pushing for a $2 trillion Belt and Road Initiative to be implemented in Victoria. However, the Scott Morrison government axed all such plans of Andrews. And guess what? He resisted the trashing of the BRI agreement signed between the CCP and Victoria.

Why would he do that? It’s really simple. He belongs to the Labor Party, which has a distinguished history of prostrating before China, even at the cost of Australia.

In 2020, Australian intelligence officers and police had raided the home and office of Labor MP Shaoquett Moselmane. The New South Wales legislator had long been under the scanner from the opposition and his party for having ties to the ruling Chinese Communist Party (CCP).

Moselmane himself has been a huge admirer of Xi Jinping which had first raised the alarm bells regarding him being a CCP stooge. He had publicly praised Xi Jinping’s “unswerving” leadership during the coronavirus pandemic. He said, “For the People’s Republic of China, President Xi stepped up and provided that leadership. He mustered the resources of the nation and together with the great people of China – fought it and contained it.”

And then, there is Labor leader Anthony Albanese, who does not seem to get tired of attacking the Australian government for going tough on China and challenging the CCP. In fact, here’s what this man recently had to say about Morrison’s handling of China, “Mr Morrison is making the grave error of prioritising his domestic political interests over Australia’s national interests.” He claimed that China was pressing its interests more assertively, while finding areas of potential co-operation, including on trade, that were in both countries’ interests, and that by not toeing the CCP’s line, Morrison was making a grave mistake.

It is important to note that Albanese is piqued to be the natural choice for the Labor party’s Prime Ministerial face in the event they win the upcoming parliamentary elections, expected to be held in May this year.

How Leaders Before Morrison Allowed Australia to be Run Over

Before Prime Minister Scott Morrison, Australia’s prime ministers really seemed to pay no heed to China’s visible plans of taking their country over. By 2019, China owned an airport in Western Australia, nine million hectares of Australian land, several Aussie coal mines and wind farms and even the Port of Darwin – a key strategic asset. China is also the largest foreign owner of Australian water.

Over the past decade, China has poured more than $150billion into Australia by investing in or acquiring Aussie companies. It was Prime Minister Morrison who began kicking the Chinese out of several projects in Australia and also set out on a spree of reviews of important strategic infrastructure assets that China had managed to gobble over the years.

Read more: Morrison is about to seize Jinping’s personal properties

Morrison also began an offensive against Chinese implants in Australian schools and universities, who were deployed by the CCP for the purpose of ‘Sinicizing’ Australians.

It is now contingent upon Australians to make the right choice. Will they let petty politics cloud their judgement, and will they let the mask-mandates imposed by Morrison become a deciding factor in the upcoming elections? That would surely be a sorry sight to behold. Morrison has done so much more for the Down Under country, and his achievements do not deserve to be ignored only because a high transmissible variant of Coronavirus managed to sweep through the Australian population.