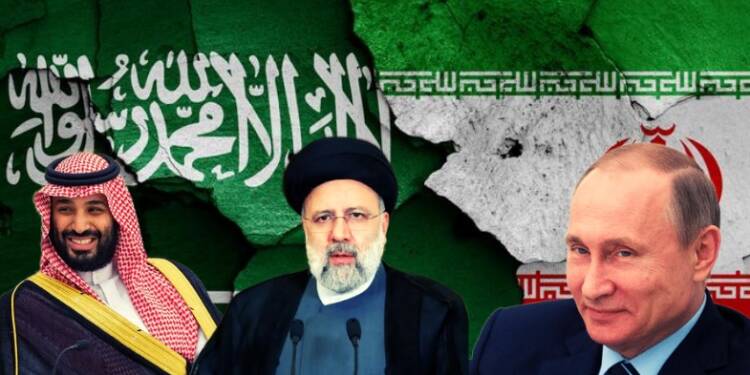 Saudi Arabia and Iran, the two fiercest arch-rivals of all time are looking all set to bury the hatchet amid increased tensions in Ukraine. Saudi Arabia’s Crown Prince Mohammed bin Salman (MBS) on Thursday said that the solution to the protracted conflict between Saudi Arabia and Iran is coexistence.

MBS expresses his will to mend ties with Iran

MBS said, “Iran and Saudi Arabia are neighbours. Neighbours forever. We cannot get rid of them, and they can’t get rid of us. So it’s better for both of us to work it out and to look for ways in which we can coexist.”

The crown prince also said that statements he heard from Iranian leaders were a sign of the betterment of the ties between the kingdom and the Shi’ite nation.

Make no mistake, Iran and Saudi Arabia have already had four rounds of negotiations, and MBS is looking more than willing to kick off diplomatic ties with Iran should the country relinquish its nuclear ambitions.

Iran, which is constantly being pressed by the US to rejoin the nuclear deal or the JCPOA, is now striving to mend its relations with the Arabs in order to expand its regional geopolitical clout. Their efforts to improve ties come amidst the faltering ties between the Arabs and the US.

MBS goes all out against Joe Biden

MBS on Thursday minced no words against Joe Biden and said that he does “not care” what US President thinks of him. MBS also mentioned that there was a big possibility that the ties between the two nations will get “downgraded.”

The betterment of the ties between Iran and Saudi Arabia is a huge threat to the USA’s Military-Industrial Complex. As of today, both of the Islamic nations consider the US their biggest adversary and are openly backing Russia against the West over Ukraine.

Saudi Arabia and Iran back Russia against the US

For instance, Saudi Arabia has pledged to stick to the OPEC plus agreement reached last year between Arab nations and Russia, while rejecting the USA’s request to shore up the oil production to mitigate the impact of the USA’s sanctions against Russia on the US economy.

Similarly, Iran has also doubled down on its anti-US campaign during the Ukraine crisis. Iran has categorically blamed the US for inciting the war against Russia and has called on the world community to stand up to America’s bullying.

Iran’s Supreme Leader Ayatollah Ali Khamenei this week said that the “Mafia regime” of the US has created a crisis in Ukraine. Reports also show that Russia could derail the JCPOA negotiations to pile up pressure on the West.

Russia striving to expand its influence

Frankly speaking, Russia enjoys deep ties with both Saudi Arabia and Iran, and any rapprochement between the two nations will only expand Russia’s influence in the region at the USA’s expense.

Saudi Arabia is a longstanding ally of the US. On the other hand, the Biden administration has impulsively relaxed sanctions on Iran to get the Shi’ite nation’s approval for resuscitating the nuclear deal. The US has always fuelled the conflict between the two nations banking on their sectarian differences.

For instance, the US last year had foolishly removed the sanctions on Iran-backed Houthi fighters in Yemen in a bid to please Iranians. The US, by reinstating the JCPOA deal, wants to end Europe’s over-reliance on Russian gas imports by replacing it with that coming from Iran.

Russia could be behind the rapprochement efforts

So, Iran’s anti-US stance during the Ukraine crisis is not just a political relief for the Kremlin, but also an economic one. Iran understands that a regime change in the US could lay the tombstone of its economy in no time, and a long-term partnership with the nations like Russia and China is the only way forward.

Iran and Saudi Arabia have been trying to sort out bilateral disputes since the last year. Now, Saudi Arabia and Iran, on the sidelines of throwing their support behind Russia over the Ukraine question, are also trying to resolve their own bilateral disputes. So, it serves all purposes for Russia to build a bloc of all anti-American nations in the Middle East, and in its bid to realize this ambition, Russia might be pushing these nations to resolve their differences and form a joint front against the common enemy.