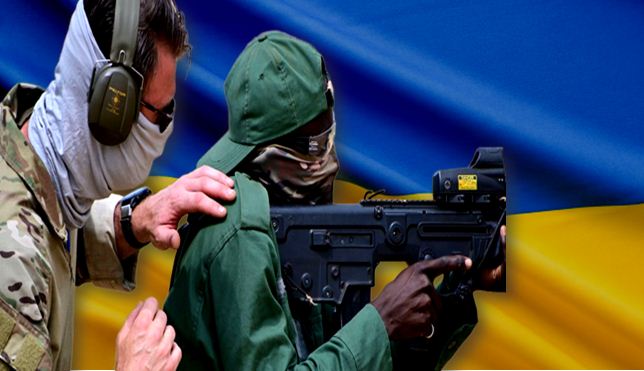 Imperial Europe had a thing for getting foreign slaves to fight its wars across the world. In the First World War, for instance, close to 4 million non-white men were mobilised into the European and American armies. Similarly, in the Second World War, millions of foreign non-white slaves from India, Southeast Asia, and Africa were made to sacrifice their arms and legs to satisfy the white world’s expansionist ambitions. Fast forward to 2022, Russia and Ukraine are at war with each other for more than two weeks now. Both powers are European, and the war primarily includes white soldiers from the two warring sides.

There’s yet no clear answer to the question that which side is winning the war. But there’s one development that not only heralds Ukraine’s humiliating defeat in the war but also unveils Europe’s racist mindset that still craves getting non-white slaves for fighting its wars.

Well, Ukraine is pleading with citizens of other nations to help it battle the invading Russian forces. Late last month, Kyiv has sent an emergency SOS to black African nations like Algeria and Senegal to assist Ukraine by sending their fighters to the war.

The Ukrainian embassy in both nations made a racist call to arms on Facebook that said, “Anyone who wants to join the defence of security in Europe and the world can come and stand alongside the Ukrainians against the invaders of the 21st century.” The post also invited interested persons to fill out a form in the end.

Read More: Syria claims that the US is transferring Daesh terrorists to Ukraine to fight Russia

The Facebook post quickly triggered a diplomatic heatwave in both of the black nations. Algeria’s foreign ministry was quick to shut the Ukrainian embassy in response. The embassy was also told to withdraw the “illegal” and racist Facebook post immediately, and it also accused Kyiv of violating the provisions of the Vienna Convention on diplomatic relations between states.

Kyiv’s efforts to hire black Senegalese people to brave the Russians on the battlefield also faced similar resistance from the Senegalese government. The Senegalese Ministry of Foreign Affairs said that the recruitment of volunteers, mercenaries, or foreign fighters on the territory of the country was “illegal and liable to the penalties provided for by law”.

As per media reports, Kyiv is paying a hefty sum ranging from $1,000 to $2,000 per day to foreign fighters along with other post-war benefits. Some White European fighters are even getting paid up to 3,000 Euros per day for the same job.

Some reports also say that Ukraine is encouraging anti-Putin fighters in Syria to fight alongside the Ukrainian military against Russia. Huda Khayti, the head of a women’s centre in Idlib, was quoted as saying by DW that “many Syrians would even like to fight alongside the Ukrainians against the Russian military.” Some US officials also say that Russia is also asking Syrian fighters to join the invading Russian forces in Ukraine.

White Europeans still seem to be living in a parallel world where their racist supremacy is guaranteed and other races are considered next to nothing. How Senegal and Algeria responded to Europe’s racist calls must set a precedent for all non-White nations that have continuously been treated literally like slaves all these years. Europe must realize: the white-dominated world order is now done and dusted! It must learn to stand on its own feet and fight its wars.