Western liberal media used to hate Ukraine and Zelensky. So, what changed? 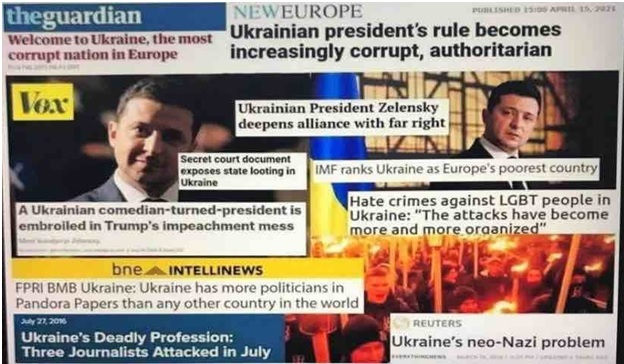 There is nothing more of eye candy than a well functioning mega-factory. And when it comes to mega-factories, the pro-establishment mainstream media lobby is in itself a well-oiled machine. It can manoeuvre and change course entirely as and when needed by its patrons. Under the previous administrations and till the end of the Trump Presidency, the Ukrainian state was managed very delicately. All the bigotry was reported, including the rise of Nazism, discrimination, crime against minorities among others.

However, since the arrival of Joe Biden and following his constant warmongering, it seems the mainstream media has undergone some restructuring. Joe Biden’s ‘Hunter Biden’ reason for pro-Ukraine stance, coupled with his Biden administration and deep state’s attempt to shift world focus away from China and to Russia, has played an immense part.

To put things into perspective, try to compare present coverage with some of the earlier reportage by the same publications. The Guardian reported: “Welcome to Ukraine, the most corrupt nation in Europe”; Reuters covering Ukraine’s neo-Nazi problem; or a report by NEWEUROPE that mentioned Zelensky’s rule to be transforming into an increasingly corrupt and authoritarian regime. And I forgot to mention the outright ostracisation of the LGBTQ+ community that has also been reported by the same publications.

But, now things have changed entirely. Ukraine under Zelensky  has now become an ideal state and Zelensky is the ideal man to be emulated throughout the west. So the question is, what changed? What happened in the short while that the US became so obsessed with both Ukraine and escalating tensions with Russia? And as soon as we understand these variables, it will all make sense why the mainstream media is acting the way it is.

Since Joe Biden took office last year, we have been consistently reporting on how he is trying to create a cold war-like situation with Russia for maintaining its sway over the European continent, NATO from falling out among other things. Last year, back in February, not even a month after taking office, the Biden administration deployed long-range B-1 bombers in Norway.

It was followed by assistance packages to Ukraine and small yet coordinated steps to increase the temperatures in Eastern Europe. Year-long, on the one hand, while Joe Biden provided assistance to Ukraine, on the other hand, he kept promising President of Ukraine, Volodymyr Zelenskyy about total support in case of any untoward escalations.

Joe Biden has made no secret of his deep love for NATO and mindless anti-Russia activism. Biden’s aims from the very first day have been those of making NATO stronger than ever before and ensuring that Russia kneels before the formidable ‘Western’ alliance. This cold war rhetoric and subsequent promises encouraged Ukrainian President Volodymyr Zelensky to take multiple anti-Moscow steps and also crackdown on pro-Russia sentiments in the country.

China put up a bait that the US should not have fallen for! But sadly, the 79-year-old President is more of a simpleton to see through this Chinese agenda. Given Biden’s poor credentials against China, it can be safely assumed that he is all set to become Nixon 2.0.

Fifty years ago, President Richard Nixon undertook a flight to China. That marked the beginning of Sino-American bilateral and economic ties. That visit made China the economic power that it is today. And today, when the Chinese economy is reeling under a massive economic crisis, Joe Biden may very well bail out the Chinese economy just to bring his anti-Russia campaign to fruition.

The priorities of Joe Biden are directly tied to the crony lobby and those who want to profit off of the crisis in Europe as well as healthier business relations with China. Therefore, the shift of the elites and the deep state towards Eastern Europe and against Russia has pushed Joe Biden in the same direction. And as a result, the western liberal media, which used to openly report about the sad reality of the Ukrainian people under Zelensky, has now turned entirely into its corner.

Ukrainians could have had a friend in Israel, but Zelensky’s handlers had different plans