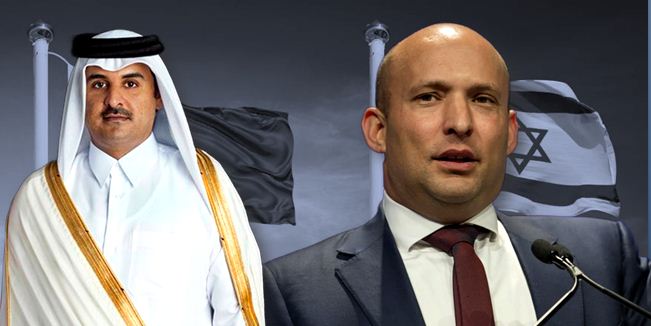 The Middle East is a harsh political terrain, riddled with myriad conflicts and protracted disputes. The developments here keep amazing observers without fail. For example, Israel and Qatar have now pledged to intensify their military cooperation in view of some “recent developments in the region.”

They also discussed the possibility of placing “advanced Israeli radars” in the Gulf state for early warning against Iranian drones and missiles. Kohavi said in a statement, “Over the past year, we have built a network of strategic-security partners in multiple countries in the Middle East. This network strengthens the strategic advantage we have over threats in the region.”

Read more: Ukrainians could have had a friend in Israel, but Zelensky’s handlers had different plans

Israel and Qatar coming together: A historic development

The news of Israel and Qatar coming together to form an alliance (possibly a military one) against Iran is flabbergasting because Qatar isn’t exactly an anti-Iran country. In fact, Qatar was the only nation that kept its trade ties with Iran intact during the tumultuous years of the Donald Trump administration. And also, Qatar has never remained friendly towards Israel. The two nations don’t even have diplomatic ties established, and trade ties were only launched in 1996.

In February this year, Qatar had categorically refused to normalize relations with Israel. Qatari Foreign Minister Sheikh Mohammed bin Abdulrahman Al-Thani had told Axios news that Qatar would continue what it called its “working relationship” to help the Palestinians, but it seemed to him unrealistic to enter into an agreement with Israel like the United Arab Emirates or Bahrain “in the absence of a real commitment to a two-state solution.”

Read more: Biden is suddenly acting harsh on Iran after receiving a severe thrashing from MBS and MBZ

Why are Israel and Qatar coming together?

So, what’s driving Qatar to now drop all of its resistance against Israel all of a sudden, and why it is suddenly going anti-Iran?

Well, from a Qatari perspective, the nation doesn’t want to be get ostracized in the region by the emerging bloc of Arab nations and Iran. Saudi Arabia recently said that diplomatic ties with Tehran could be established should the latter relinquish its nuclear ambitions. Given the longstanding conflict between Qatar and other Arab states, it won’t bode well for Doha for the Arabs to bury the hatchet with Iran.

Secondly, America could be a reason for growing defence ties between Qatar and Israel. The recent meeting between the military chiefs of Qatar and Israel took place at the US Naval Forces Central Command headquarters, the US Navy’s Fifth Fleet and Combined Maritime Forces, which are stationed in Bahrain. Moreover, the US could also be pressing Qatar to join the anti-Iran bloc to further pile up more pressure on Iran to extract concessions on the JCPOA deal negotiations.

Thirdly, this also serves Israel’s interests on many fronts. Israel is increasingly feeling concerned about the prospects of a full-blown diplomatic partnership between its Arab allies and Iran. Israel is worried that the friendly relations between Iran and Arab nations will end Israel’s favourable position in Middle Eastern affairs, and will restraint Israel’s anti-Iran charm offensive.

So, as Iran and Arab nations look forward to normalizing their bilateral relations, Israel is sneakily strengthening its defence ties with Qatar under America’s auspices. America recently granted Qatar a much-sought-after status of a major non-NATO ally. Also, America has requested Qatar to help it with resolving the EU gas crisis by diverting more supplies from Asia to Europe amidst the Ukraine crisis.

So, to hinder the Middle Eastern bloc, comprising Iran, Saudi Arabia and the UAE, close allies such as Israel and the US are striving to court Qatar’s support to shore up their presence and influence in the region.