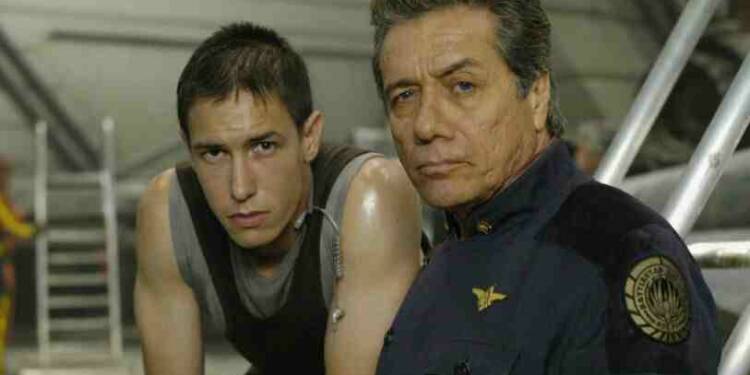 Bodie James Olmos is an American actor who was born on August 27, 1975. He is the grandson of Howard Keel and the son of Edward James Olmos and Kaija Keel. In this article we are going to talk about biography, career, notable works, family and education of Bodie Olmos and we hope you will enjoy that.

Mico Olmos, his older brother, is an actor, while Daniela Olmos is his younger sister.

In 1982, when Bodie James Olmos was seven years old, he made his debut appearance on screen in The Ballad of Gregorio Cortez. His most recent television role was as Lieutenant Junior Grade Brendan “Hotdog” Costanza in Battlestar Galactica, opposite his father. He also appeared in Walkout, a film directed by his father.

Bodie James Olmos was named after a California ghost town that his mother, Kaija Keel, visited when He was a child. Bodie had his debut acting appearance in American Playhouse: The Ballad of Gregorio Cortez when he was only seven years old (1982).

Bodie James Olmos used to be a triathlete (swimming, biking, and running), and he still runs, but surfing has been his favorite activity for nearly two decades. He is also a talented drummer with a musical background. He and his brother like jamming and singing together. Bodie enjoys playing classic blues, but his listening tastes are more wide, and one of his favorite performers is Carlos Santana.

Bodie attended UCLA School of Theatre in Los Angeles and graduated in 2000. He took more acting classes and graduated from the Sanford Meisner Center with a degree in acting.

Bodie James Olmos adores live theater and had been in a performance of Luis Valdez’s “Zoot Suit.” He also appeared in “War” at the Los Angeles Theater Center’s Latino Theatre Company. In 2001, he joined the cast of American Family (2002) as “Jess Gonzales,” a young character. Bodie has also finished a number of short films, including “Capped,” a UCLA Graduate short film. In October 2005, he completed another short film, “Manejar,” which was accepted for competition at the 9th annual Los Angeles Latino International Film Festival.

Edward James Olmos (February 24, 1947) is an actor, director, producer, and activist from the United States. He is most recognised for his roles as Lieutenant Martin “Marty” Castillo in Miami Vice (1984–1989), American Me (1992), William Adama in the reimagined Battlestar Galactica (2004–2009), instructor Jaime Escalante in Stand and Deliver (1988), and Detective Gaff in Blade Runner (1982) and Blade Runner 2049. (2017). In the FX series Mayans MC, he played the father of two members of an outlaw motorcycle club.

He’s also recognised for his roles as patriarch Abraham Quintanilla in Selena, narrator El Pachuco in both the stage and film versions of Zoot Suit, and Chicharrón in Coco. Olmos has been a pioneer for more diverse roles and images of Hispanics in the United States media throughout his career.[citation needed] His notable directing, production, and starring roles for films, made-for-TV movies, and TV shows include Wolfen, Triumph of the Spirit, Talent for the Game, American Me, The Burning Season, My Family/Mi Familia, Caught, 12 Angry Men, The Disappearance of Garcia Lorca, Walkout, The Wonderful Ice Cream Su and American Family, and Dexter.

Biography of Bodie James Olmos is incomplete without talking about his TV appearances and movie projects so let’s dive into it.

We hope this biography article of Bodie Olmos will be helpful for you to understand his journey and works.