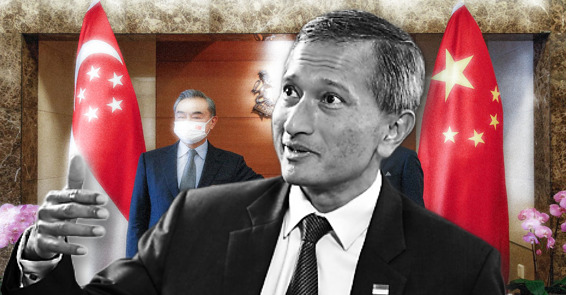 Singapore is a friend of the free world. It has strong cultural and political ties to the United States of America. Singapore is also a part of Southeast Asia, a region that sits at the core of Chinese expansionism. Earlier, the economic heft of China, made Singapore act more diplomatically and their criticism of Beijing has been cryptic. However, the Chinese economy has become the ghost of its previous self, and no amount of cash injections are helping in the recovery.

As the Chinese economy and diplomacy, both are falling at a sporadic pace, Singapore has also become somewhat overt with its criticisms and demands towards China. There is no dearth of evidence when one tries to prove the sophistication of the Singaporean foreign policy, and in line with that, Singapore recognizing the opportunity has issued a veiled warning to China. Singapore’s foreign minister is calling on China to use its clout to urge Russia to end its invasion and brutality in Ukraine, as the country slaps unilateral sanctions on Russia.

Vivian Balakrishnan, the minister, said China’s “characteristics” will aid it in reasoning with Russia. “I hope they will assert their influence with Chinese characteristics, which means quietly and discreetly, but effectively”. Minister Vivian has warned that China’s policies in the following days and weeks may determine the global economy’s future. These messages are significant as the small Island nation is finally exerting pressure on China, which it was long capable of, but decided not to pursue.

Singapore can be the fulcrum of anti-CCP diplomacy in ASEAN

What the ASEAN needs is an anti-China power that commands respect and enjoys acceptability throughout Southeast Asia. And Singapore could better any other country to take that seat. It isn’t a party to the South China Sea disputes. Geographically, the island city-State is located right in between the ASEAN countries and enjoys peaceful relations with all other Southeast Asian nations

Singapore is economically and diplomatically strong. It is one of the world’s fastest-growing economies and is already a high-income country with one of the world’s most business-friendly policies. These guys have it all sorted out.

Read more: Only Singapore can protect ASEAN from the Cambodia-China nexus

Just like Oman has managed to make friends and command respect throughout the Middle East, Singapore has managed to make friends all across Southeast Asia. And Singapore has achieved this with sheer diplomacy, without using coercive influence or military firepower against anyone. Given this background, we can say that Singapore’s warning will go a long way.

While Vivian hopes China will exert influence over Russia, he believes the rest of the world will have to wait and watch. Vivian, on the other hand, was pleased by how many ASEAN countries, including Thailand, voted to censure Russia at the United Nations, with only two countries abstaining. He emphasized that neither China nor the United States should be seen as ‘godfathers’ of Southeast Asia.

After Russia’s invasion of Ukraine in February, Singapore was the first country in Southeast Asia to impose unilateral sanctions on Moscow. Singapore seldom sanctions other countries without the formal consent of the United Nations Security Council, therefore this was cited as a remarkable step. Making prudent steps ahead, little Singapore is standing up for principles and expressing hope for the rules of engagement for this new era.

IBVS Meaning with Explanation and Definition