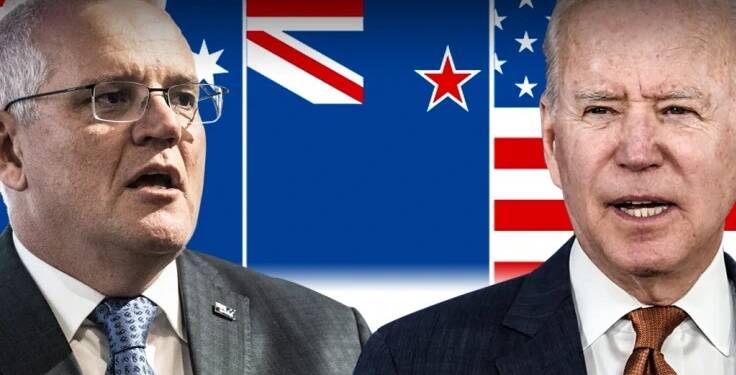 Russia is preparing to launch a massive cyberattack on the US. Well, there is no dearth of reasons why Russia would do so. The US is actively fanning the fire in Ukraine by recklessly provoking Putin and doing nothing to rescue Ukraine at the same time. But that’s not where the 79-year-old President is stopping. He now wants Australia and even New Zealand to be dragged into the Russia-Ukraine crisis.

US forcing Australia and New Zealand to join its war

The Sydney Morning Herald on Friday reported that the Biden administration is eying to invoke the 1951 ANZUS (Australia-New Zealand-US) treaty to push the two nations to support America’s cyber warfare against Russia. The 1951 treaty calls for the three nations to collectively respond to any security threat faced by any of the member nations. This treaty was amended in 2011 to include cyber-attacks as well as military attacks as a potential trigger for a joint response. Now, Biden wants to exploit it.

The top cyber security adviser to President Joe Biden, Anne Neuberger, told reporters in Sydney that they would expect Australia to stand by the US in any event of Russian cyber aggression against the Americans. She said, “the partnership between the US and Australia on intelligence and cybersecurity is so deep that we would expect that if there was any significant cyber-attack, whether, in Australia or the US, we would each be there for the other in terms of rapid intelligence sharing, rapid incident response and remediation, and then determining attribution and consequences.”

Read More: Australia learns some hard lessons from the Russia-Ukraine war and decides to develop its own military

US inviting Russia to flatten Australia’s IT infrastructure

The US has said that Russia could be planning large-scale cyber-attacks on American companies in retaliation to the US sanctions. Well, as per USA’s own estimation, Russia is not planning such attacks on Australia or New Zealand. So, by embroiling Australia and New Zealand in this conflict through invoking the ANZUS treaty, the US is simply inviting Russia to target critical Australian IT infrastructure. And living up to its propensity, the Biden administration may very well leave Australia and New Zealand in the lurch when push will come to the shove, just like it left Ukraine after Russia launched the invasion into Ukraine.

No dearth of challenges for Australia in the pacific

Frankly speaking, it’s a bait that Australia shouldn’t fall for! Australia has plenty of challenges to deal with in its backyard. Only this week, it has been reported that China is planning to militarize the Solomon Islands by forging a security alliance with the Pacific nation. This is a grave security threat for the Kangaroos. Dealing with this crisis is what should be the Scott Morrison administration’s priority. Biden couldn’t even assist Australia in defending itself against the Chinese menace, and now he’s dragging them into a war that isn’t even theirs.

And it is not like Australia has not done anything to punish the warring Russian president. Australia has been a front-runner in extending financial support to NATO’s anti-war efforts. In February, Prime Minister Scott Morrison had said that Australia is contributing to a campaign to arm Ukraine by sending weapons to NATO. So far, Australia has offered humanitarian aid worth above $100 million to Ukraine. Around 5,000 Ukrainians have been granted visas to travel to Australia, including skilled migrant and family reunion visas, as well as student and tourist visas.

You see, Australia doesn’t need to be told or forced by the Biden administration to do what is required, and what is in Australia’s interests. But, by invoking the ANZUS treaty, Biden just wants to dominate the American allies and want them to sacrifice their own interests to satisfy his appetite to punish the Russian President.