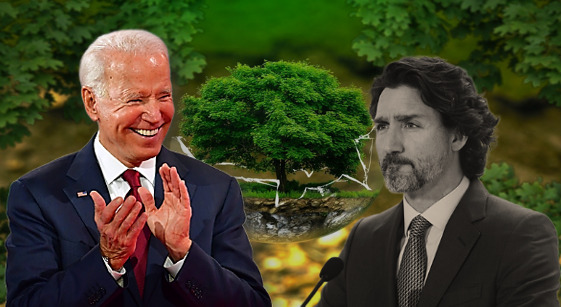 Canada is not just an ordinary nation. Its GDP worth $1.64 trillion is the ninth-largest in the world. Canada is a G7 country and enjoys significant clout in the Western world. Yet, the nation under Prime Minister Justin Trudeau has been getting one diplomatic setback after another of late. Trudeau recently got humiliated and got called a “dictator” by a right-wing European parliamentarian in Brussels. And now, Canada’s “friends” the US and EU seem to have driven a stake through the heart of Ottawa.

Recently, the White House declared that the US and EU were in talks to establish a joint Task Force to ensure energy security for Ukraine and Europe to reduce the latter’s dependence on Russian fossil fuels.

A White House release read, “We will continue to collaborate to advance the production and use of clean and renewable hydrogen to displace unabated fossil fuels and cut greenhouse gas emissions, which will include both technology and supporting infrastructure.” The release also mentioned the USA’s plans to boost LNG exports to the EU to help the bloc reduce its dependency on Russia.

European nations and US will work together to strengthen LNG import infrastructure in the EU. The release said that the European Commission will work with the EU Member States toward ensuring stable demand for additional U.S. LNG until at least 2030 of approximately 50 bcm/annum.

Canada nowhere to be mentioned

The US and EU are already chalking out a long-term strategy to boost non-green or fossil fuel exports to the EU that contradicts Biden’s own green agenda. The EU will now buy more gas from the US, thus filling Washington’s coffers. However, it’s anguishing for Canadians to see how their nation is, very conveniently, being left out of this mechanism.

Energy security is vital for Canada too. High gas prices are taking a massive toll upon common Canadians. A recent study reported by Canada’s Global News revealed that 54% of Canadians are nowadays driving less to offset the rising costs at the pump.

Sacrifices that Canada made for the US and EU

Canada has always stood by USA’s green agenda and has promoted green policies even at the expense of its own economy. Despite gas prices going through the roof at home, Canada had also pledged more gas and oil exports to the US earlier this week. “By the end of this year, Canadian producers will be positioned to export an extra 200,000 barrels a day of oil to the U.S., as well as natural gas equivalent to 100,000 barrels of oil,” Natural Resources Minister Jonathan Wilkinson had said.

Read More: Canada wanted to supply weapons to Ukraine, turns out it didn’t have any

But then, we have the US and EU keeping Canada completely out of an energy security mechanism that is sure to have a far-reaching effect on Canada’s energy securities. Canada accounts for 10% of the world’s proven oil reserves. And thus, the country can replace any non-Western source of oil and gas for the European Union. Even Prime Minister Justin Trudeau had in early March argued that Russia is a non-reliable partner in energy supply chains, and Canada could step up its efforts to supply the EU with gas and oil exports.

Frankly speaking, Canada’s reckless pursuit of the USA-imposed green agenda has now led the nation to a point where it doesn’t even have a single LNG export terminal in the nation. Now, as the US mints billions out of LNG trade with the EU, and as it chalks out long-term strategies to secure gas exports to European nations, Canada has been left scratching its head in bewilderment. All the sacrifices that Canada made to please the US are now being mocked by the not so generous alliance of the US and EU.