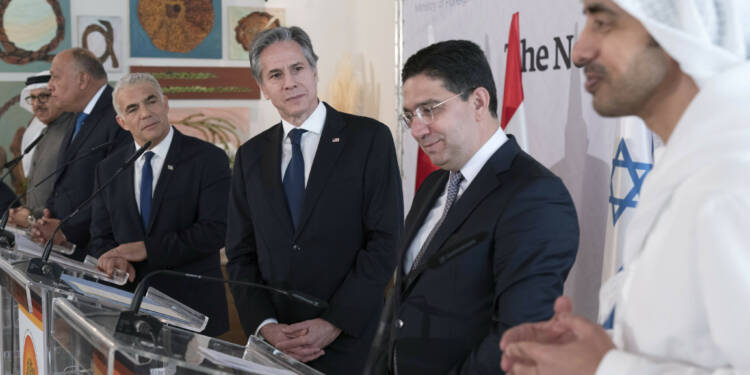 The foreign ministers of Bahrain, Egypt, Morocco, and the United Arab Emirates met in Israel for the first time. These officials were also joined by the US Secretary of State Antony Blinken. It was dubbed a “historic diplomatic summit” because it was the first time these countries’ foreign ministers sat at the same table for discussions.

The meeting focused on the security threats that a rising Iran may pose following Biden’s conclusion of the Iran nuclear deal. “Advancing regional security architecture” was also on the agenda.

Since taking office, Biden’s desperation to resurrect the nuclear deal has alarmed the Arab countries and Israel. These countries are wary of what is going on behind closed doors in Vienna because they see Iran’s rise as a threat to the region’s “political and security establishment”. Iran cannot be trusted in terms of its nuclear programme and ballistic missile development.

Furthermore, the resurrected agreement will reduce sanctions and provide more financial assistance to Iran. The Arab world and Israel are concerned that Iran will use these funds to further its goals.

The Gulf States, which openly allied with Israel through the Abraham Accords as part of a joint effort to curb Iran’s pernicious agenda, are now more concerned than ever. However, Biden continues to pursue the deal recklessly, despite the fact that Israel and other Arab nations’ legitimate concerns have not been addressed. The United States’ desperate pitch to resurrect the deal appears to be undermining the “Abraham Accords”.

Trump withdrew from the nuclear deal and consented to the Arab-Israeli peace deal to stabilise strategic relations between the Gulf nations and Israel, thereby weakening Iran. However, Biden’s decision to reanimate the nuclear deal only seems to strengthen Iran. The agreement will allow Iran to re-establish its hegemony as the economic blockade that it is currently subjected to would be diluted.

The Arab countries and Israel are extremely concerned that the Biden administration will cut a bad deal, including delisting the Iranian Revolutionary Guards Corps from its terrorism blacklist.

It remains to be seen whether this strong push from Israel and its Arab partners will deter Biden from signing a deal with Tehran. Nonetheless, with the five foreign ministers making a vociferous and consolidated case to Blinken, the US is more likely to offer other assurances and compensatory damages to its regional allies to counterbalance some of the repercussions if a deal is reached in Vienna.