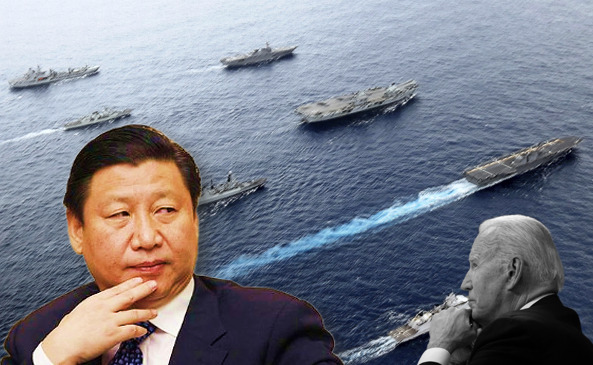 China pretty well knows how to feather its own nest. While Biden is busy with what is happening in the Russia-Ukraine conflict, China is expanding its presence in the Indo-pacific region. Biden’s anxiety over Russia is offering China an opportunity to get a foothold in the region.

There had been reports of China militarizing three islands in the South China Sea, followed by a military agreement with the Solomon Islands. Cambodia has now been added to the list of countries involved in China’s expansionist policy..

China has a history of using military and economic coercion to gain influence in other countries. It exploits commercial arrangements at host country ports to support military functions and conceals the true purpose of its installations under its much-touted One Belt, One Road initiative.

For example, while China established a logistical base in Djibouti in 2017, PLA navy marines with armored vehicles and artillery are stationed there. This exemplifies Dragon’s expansionist fantasies.

Similar Chinese efforts are now clearly visible in the South China Sea waters and the remaining Indo-Pacific region, which would provide enormous economic opportunities for China. There had been reports of China militarizing three islands in the South China Sea, followed by reports that China was negotiating a security pact with the Solomon Islands that would provide a safe harbor for its warships some 2,000 kilometers (1,200 miles) from the Australian coast. Under the terms of the draught agreement, China could send police, military personnel, and other armed forces to the Solomon Islands to help maintain social order, among other things. It could also send warships to the islands for rest and replenishment, sparking speculation about China establishing a presence there.

A new Pawn of China in the region

With ulterior motives, it now has its sights set on Cambodia. Nonetheless, Cambodia maintained close ties with the US until reports surfaced in 2019 that Beijing had signed a secret agreement allowing its armed forces to use parts of Cambodia’s Ream Naval Base on the Gulf of Thailand exclusively. The strained relations between the United States and Cambodia gave the dragon more room to spread its wings in the region. In this backdrop, Cambodia struck up a bond with China further. This is evident from the fact that Cambodia has consistently blocked criticism of China within the 10-member ASEAN.

And now, as Beijing seeks to strengthen regional security ties, the Chinese and Cambodian armies have signed a memorandum of understanding. The signed Memorandum of Understanding will allow Chinese military personnel to station themselves in Cambodia. It can be exploited by China in the future by gaining access to the nation’s strategic ports. In fact, Cambodia chairs ASEAN, time and again. This may in turn further give China an advantage in influencing others in the bloc.

Without a doubt, China is aggressively trying to militarise the Indian ocean region and incorporate it into its own “sphere of influence.” And it is prompted further because the US is distracted wailing about Russia.

Instead of confronting China, the US is urging all of its regional allies to put a stop to Russia’s involvement in the Ukraine conflict. Mr. Biden appears to be arrogant and is oblivious to the fact that China is his true adversary. Without a doubt, with Biden’s stupidity, China is getting its way and aggressively pursuing its expansionist policy.