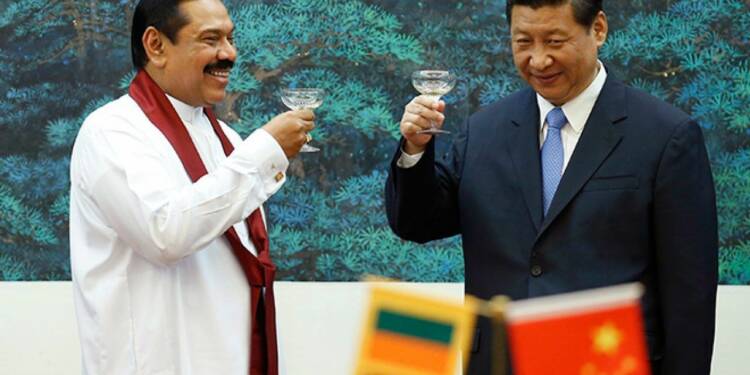 China’s plans to build a $14 billion colony in Sri Lanka called the Port City of Colombo (PCC) are facing a major backlash. Companies are not ready to invest in the troubled country and therefore the project might fail to attract enough investments. Meanwhile, Colombo itself is looking to take New Delhi’s assistance in a bid to kick Beijing out of the project.

In either case, it is China that stands to lose out.

What is the Port City of Colombo (PCC) project?

It is a controversial project launched by the Chinese during President Xi Jinping’s visit to Sri Lanka in 2014.

China’s plan was to build a colony of its own at a popular spot in Sri Lanka’s capital city.

Read more: Sri Lanka refuses to learn its lessons as the country is all set for a repeat of the Hambantota fiasco

And what do Chinese infrastructure projects bring along with them? Yes, you got it right– predatory investments.

In the case of the Colombo port city project too, China invested a total of $1.4 billion to help PCC reclaim 269 hectares of land.  In return, China won a 99-year lease for about 116 hectares of the land.

The project itself was shaped as a joint venture between the Sri Lankan government and a subsidiary of China’s state-run infrastructure firm, China Communications Construction Company (CCCC).

That was just the initial investment though. China also hoped to rope in another $14 billion for the development of the project over a period of 20 years.

And where will this money come from? Well, senior officials at the PCC Economic Commission have been reportedly fielding from Hong Kong investors to develop the project. China probably had a plan in mind – businesses facing trouble in Hong Kong after the imposition of the national security law would invest in PCC and the Chinese Communist Party (CCP) will exercise indirect control over them. This was a part of Beijing’s grand colonization plan.

China wanted to create a new Dubai or Singapore, except for the fact that it would be a Chinese colony.

However, the Chinese plan is filling apart. Sri Lanka is presently embroiled in a major political and economic crisis. The cabinet of the country’s government has already resigned which shows just how bad the situation is.

And then, there is growing social unrest in the country due to growing inflation and a deepening economic crisis in the country. Sri Lanka’s diminished foreign exchange reserves have raised the prospect of the country defaulting on its $6.9 billion foreign debt. There is also a risk of the island country failing to pay for basic necessities like fuel, food and medicines.

So, investors definitely feel unsure about investing in PCC. Analysts believe that the PCC cannot sidestep the turmoil in Sri Lanka’s economy. Dilshan Wirasekera, a top executive at an investment bank, said, “I cannot see a foreign investor coming in with this overhang.”

Therefore, Sri Lanka wants India to invest in the project. Colombo is trying to convince New Delhi that the project is not Chinese-owned.

Read more: Sri Lanka becoming Chinese colony is lesson for others; stay with India, or watch yourself crumble

Saliya Wickramasuriya, a member and official spokesperson of the Colombo Port City Economic Commission claimed that the project is “not” linked with the Belt and Road Initiative (BRI). Wickramasuriya also said that there was “no debt” on Colombo.

The official also said that Indian investment firms can “reap long-term benefits” by putting their money into the project.

Wickramasuriya concluded the project is “not owned by the Chinese government but by the Sri Lankan government”. He said that Chinese ownership was a “myth” that needed “to be broken.”

Either Sri Lanka will persuade India to invest in the project, preventing the PCC from becoming a Chinese colony, or the project will fail and sink. In both circumstances, it is China’s investment that will be squandered.