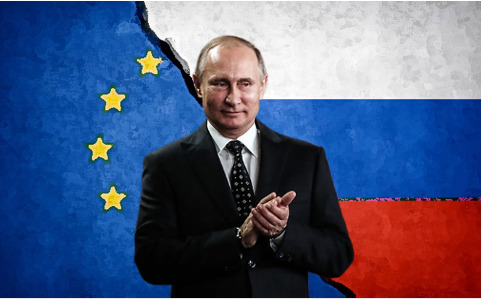 Who is funding Vladimir Putin’s war in Ukraine? Sanctions, threats, diplomacy, and coercion; nothing seems to be working out for the West. Putin is simply unstoppable! Well, that’s European money that is making him so unrelenting and obstinate.

Now consider these numbers: The EU has transferred 35 billion Euros to Russia’s bank accounts since the invasion started. This amount equals one-fourth of Ukraine’s GDP. This is 35 times more than what the EU has offered to Ukraine in military aid. In monetary terms, the EU’s support for Russia is 35 times stronger than its support for Ukraine.

The EU’s foreign policy chief Josep Borrell also admitted that the military aid is given to Ukraine so far was equivalent to one day’s worth of energy trade between Russia and the EU. Borrell said, “We have to help [the Ukrainians] defend themselves … We have given Ukraine 1 billion euros. It might seem a lot but 1 billion euros is what we pay Putin every day for the energy he provides us.”

No relief for EU’s gas problem

The EU’s gas problem is making of its own. The bloc’s heavy reliance on Russian gas is what canceling all Western sanctions on Moscow. The European Commission announced on Tuesday that the EU would reduce its reliance on Russian gas by two-thirds by next year. Under the fifth round of sanctions against Russia, the EU has declared it won’t import coal from Russia. But, nobody is paying heed to the elephant in the room—Russian gas.

Take Latvia’s case for example. The Baltic nation bravely announced on the first of this month that it will stop importing Russian gas with immediate effect. But it took Latvia just 24 hours to meet the reality. Latvia realized that its status as a leading gas provider in the region solely depends upon the inflow of Russian gas. A day later, Latvia’s leading industry in the energy sector announced a long-term contract with Russian gas supplier Gazprom for importing Russian gas for the next 30 years. Mind the fact that Latvia is allowed to pay Russia in Euros and not Rubles.

Read More: Funny! Latvia’s ban on Russian gas could last only for 24 hours.

Now this reveals the sorry state of the European Union. One man, using his gas empire, can make a powerful economic bloc of 27 nations dance to his tunes, while the most powerful nation on the earth watches helplessly. But, it isn’t that easy for the EU to relinquish its heavy reliance on gas imports from Russia, given Uncle Sam’s frayed relations with almost every oil and gas producing nation on the planet.

Iran, Venezuela, and Arab nations today view the US as nothing less than an enemy. Moreover, the West’s green agenda has already resulted in the premature evaporation of its vast oil and gas reserves. This has piled misery of epic proportions on the EU. So, despite throwing its diplomatic, emotional, and military support behind Ukraine, the EU is forced to fill Russia’s coffers at ‘gaspoint’. This is a collective shame for the Western world that boasts about standing for freedom and peace around the world.