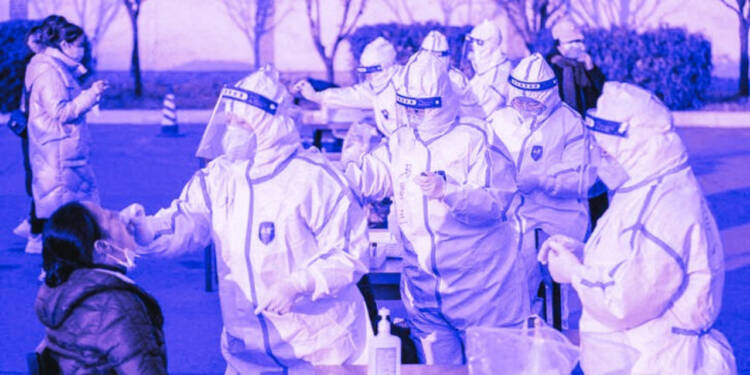 The Chinese government is sealing its citizens shut in their homes to save them from the raging pandemic, but even a bigger catastrophe inside their homes is now baying for their lives—The food crisis.

Chinese observers on Twitter recently revealed that millions of people in the Covid-ridden city of Shanghai are facing extreme food shortages and other basic necessities. Political Science Professor at the University of Chicago Dali Yang wrote on Twitter that many are surviving on one meal a day only.

The professor further wrote in a tweet, “The degree of desperation is epitomized by this clip from a few days ago. This young man called the police saying that his family had run out of food for four days. He wanted to go to the police headquarters and be apprehended so that he would be fed.”

The police answers that they were also struggling to feed themselves and had nothing to spare. https://t.co/1TtKZmhVTz

Tonight there are various scenes of confrontation as residents show their deep frustration with the draconian lockdown measures, their despair and anger, and seek help. pic.twitter.com/xXV2Kx6odq

There’s a serious food supply problem engulfing Shanghai right now. The problem is worse for people who don’t have Shanghai residency. The authorities are not paying any heed to their needs and skipping out on providing food and medicines to them. With no relief in sight, such people are left to fend for themselves amidst this grave pandemic.

passionate plea from a mother: pic.twitter.com/YImCZIzt0p

A plea by a Shanghai resident Stormzhang is also making the rounds on Chinese social media, where he explains the dire situation the 26 million people of Shanghai are currently living in. He writes, in a translated note seen by TFI Global, that he received food supplies only thrice during the 22-day long lockdown. He further wrote, “This could solve the food problem for just six days, which proved to be a drop in the bucket. Some communities are giving a lot of food supplies but the problem lies in the supply chains.”

Mind the fact that the government is using app-linked programs to reach the needy citizens and provide them with food. However, elderly people who can’t use apps and other official means for help are the most vulnerable in this difficult situation.

The human cost of this awful lockdown is unfathomable, people are being driven to the brink, the mental health cost is immeasurable, this man sums up how many are feeling at the moment pic.twitter.com/0kBGPwiNEE

The local authorities, working under tremendous pressure, are now being made sacrificial lambs at the CCP’s behest to dampen the people’s fury. China’s official pamphlet Global Times reported on Friday that “three officials in Shanghai’s Pudong New Area were dismissed from their administrative posts for dereliction of duty and failure to control the COVID-19 outbreak.”

Thanks to China’s failed Zero Covid Strategy, the city of Shanghai has been facing an unprecedented surge in covid infections over the past month. Chinese media reported that 131,524 COVID-19 positive cases were reported including 127,131 asymptomatic cases in Shanghai. However, real or unreported figures may hugely dwarf the official numbers.