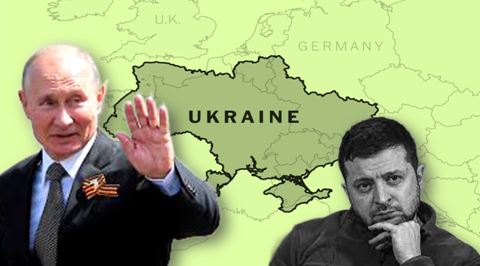 48 days ago, Russia launched its invasion of Ukraine. It made rapid gains in Southern Ukraine, and along with its allies in the East, was able to make significant headway in Donbas as well. Northern Ukraine proved to be a tough nut to crack for Russian forces, as it faced rigid Ukrainian resistance. Now, Russia has withdrawn from Kyiv’s outskirts, and its troops have fallen back to Belarus.

48 days into the war, what does Russia plan to achieve now? What are its goals in Ukraine? Let’s have a look.

Russia has shifted its priority from toppling Kyiv, to first gaining control of Donbas. The republics of Donetsk and Luhansk in Eastern Ukraine are together referred to as ‘Donbas’, and Russian is traditionally spoken there, more than Ukrainian. Currently, Russia does not control the entirety of Donbas. Before May 9, however, Vladimir Putin is looking to wrest control of this coal mine-rich region. May 9 is celebrated widely in Russia as the day of victory over Nazi Germany.

Mariupol About to Fall

Furthermore, there is the city of Mariupol in Southern Ukraine. This port city is essential to Ukraine, and it is on the verge of falling to the Russians. For Moscow, however, the city is even more crucial, as it provides a land bridge between Russia and Crimea. A significant part of Mariupol is under Russian control, and it seems like Moscow will declare the city’s fall to its troops in a couple of days.

A Return to Kyiv?

Once Russia takes control of Donbas and Mariupol, it seems it will renew its offensive against Kyiv. Putin’s right-hand man for the war in Ukraine, Ramzan Kadyrov has said the same. Kadyrov is one of the most powerful men in Russia right now and leads the Chechen Republic.

Kadyrov, who has often described himself as Russian President Vladimir Putin’s “foot soldier,” has said that there should be no doubt about Kyiv. He said, “I assure you: not one step will be taken back. There will be an offensive, not only on Mariupol but also on other places, cities and villages.”

Kadyrov added, “We will fully liberate Luhansk and Donetsk first, and then take Kyiv and all other cities.”

What this means, is that toppling Kyiv is still very much on the Kremlin’s list of agendas, and that celebration of Russia’s withdrawal from northern Ukraine might just prove to be dramatically premature. Russia is restocking and replenishing its forces for another offensive against Kyiv and other Ukrainian cities, once it takes control of Donbas and completely neutralises Ukraine’s military and critical infrastructure.

What’s the Delay all about?

Many wonder why Russia has not won the conflict already. You see, Russia is playing a strategic game here. Russia wants to demilitarise Ukraine and make it a neutral state. Ukraine is being asked to officially give up on its demand to join NATO. Now that, in Ukraine, would require a constitutional amendment, and to get that done, a referendum must be held.

The people of Ukraine must vote in favour of such a referendum. Hence, Russia is looking to not level Ukrainian cities with continuous bombardment. That leaves a significant leeway for Russia to impress Ukrainians to vote in its favour, and also helps it avoid international action for alleged war crimes.

Russia has limited its military campaign to targeting Ukraine’s critical infrastructure, apart from destroying its military setup. Certainly, the civilians have suffered as collateral, but everyone knows, that the picture could have been much worse, had Russia waged a brutal campaign against all of Ukraine and levelled all of its cities. If Russia wants, it can destroy Ukraine to the ground and win the war, but that is not what serves Putin’s strategic vision for the region.