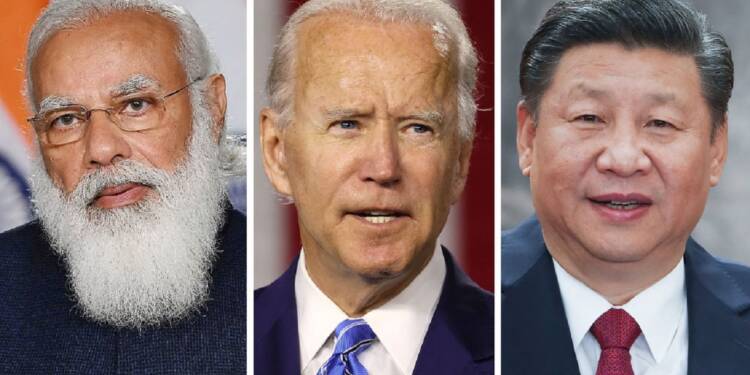 During a joint news briefing on Monday following the fourth US-India 2+2 Ministerial Dialogue, US Secretary of State Antony Blinken noted that the US is closely monitoring what he called “an upsurge in human rights abuses” in response to questions from certain media officials.


From the Trump tenure itself, the US has been half-hearted regarding India’s human rights concerns in order to avoid a deterioration in relations with India. But that is no longer an option with Joe Biden in charge. Now, when it comes to strengthening relations with India, the US has always been dismissive, even if it wishes to enlist New Delhi’s help.

With his latest Anti-India rant, Biden just tried to project India as a member of the Russian-China Axis. Well, Mr. Biden, your attempt is unfounded, irrational, and ludicrous.

Is there any similarity between Russia-China and India??

For quite some time, the United States and the West have been keeping an eye on Russia-China. These two countries are thought to be hostile to freedom of expression, democracy, and, most significantly, minorities such as the Uyghurs. If Biden is watching ‘Human Rights in India,’ he is in for a treat as he’s watching the other two nations using the identical specs he’s using to observe India.

There are a few points, to find out whether India is falling on the Russia-China axis.

The fear of internal destabilization motivates both these countries’ desire for non-interference. So, these countries regulate propaganda and conspiracy theories of intervention. In Russia, the color revolutions were a series of Western conspiracies that could be replicated on Moscow’s streets; for China, the student protests in Hong Kong were fueled by an unseen American hand.

Has India, on the other hand, ever supported conspiracy theories blaming the West for everything? No, India considers its situation to be an internal one and asks others to keep it aside.

Penetration of Media and the Internet

Russia has chastised the Internet as a ‘CIA Project’ and taken it down several times. Because the Internet is heavily controlled and only Chinese propaganda is published on web pages, it will be much better if we do not mention China altogether.


On the other side, the media is spied on in order to disseminate material that promotes the authority’s agenda. Sputnik and Global Times, their news outlets, are only mouthpieces for the rulers.

Fears of radical Islamic terrorism emanating from Chechnya have parallels in China, where the Xinjiang slaughter of Uyghur Muslims grasped heavy criticism from across the globe.

The threat of Islamic terrorism is genuine, and India has spoken out against it on several occasions. India, on the other hand, has a rich religious past. Have you ever heard of Muslims being slaughtered in India under the guise of Islamic terrorism? India has always respected minorities’ dissent and considers them to be a part of the development process.

The hypocrisy of The United States

So, Mr. Biden, where exactly are democratic rights being violated? In reality, it is a plot to get India to support you in your fight against Russia.

Despite the war, India is trading with Russia in style. Due to this, India has drawn a lot of western attention since the Ukrainian invasion began as it consistently declined to criticize Russia’s actions while advocating for ‘de-escalation.’ The US as usual got enraged by India’s pro-Russian posture.

When convincing India through Indirect talks didn’t work, the US sent Daleep Singh, its Deputy National Security Advisor for International Economics, to put extra pressure on the government. Daleep Singh urged, or should I say warned, India against taking a pro-Russian stance.

Read More: Biden and his love for China


The United States does not attempt to conceal its dishonesty, selfishness, or imperial attitude. They are only concerned about making money from oil and isolating Russia and China. This is why many countries, including India, are critical of many of the policies of the United States.

The US believes that if any nation is not interested in what is being propagated by them, then the nation is on Russia-China Axis. These tricks may work with nations such as Japan and Australia, but not with India.

In addition, India has a long tradition of strategic autonomy, which it will maintain. The United States’ attempt to isolate India will be met with laughter due to its nonsensical reasoning.