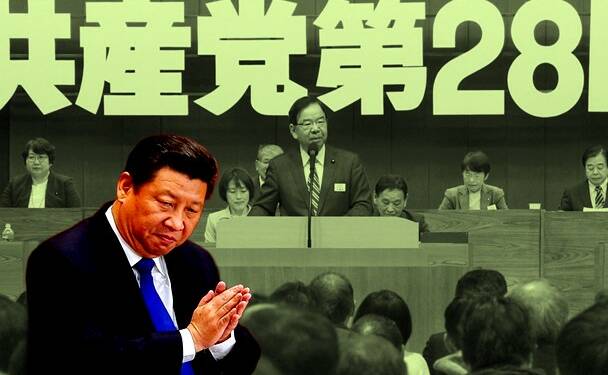 Nationalism was a temporary and unnatural phenomenon, according to Karl Marx, and one of the signs of human self-alienation. He dismissed nationalism as a bourgeois phenomenon supporting the capitalists’ interests. The grandpa of Communism saw patriotism and nationalism as “man’s fetishization of a monster of his own creation”. Perhaps this is why he invited workers from all over the world to put their nationalities aside and unify.

One would think that following Marx’s path, communists all around the world would sympathise with their comrades from other countries. With Japanese communists, however, this is not the case. Marx’s ‘proletariat internationalism’ does not appear to be shared by the Japanese communists.

The Japan Communist Party (JCP) was founded in 1922 as a left-wing political party in Japan. More than three decades after the Soviet Union’s fall, the party still exists. It is a rare example of a viable communist political presence in a developed country.

While the JCP had split from the Chinese Communist Party in the 1960s, causing a schism among the party’s most radical members, the rupture was short-lived. Soon after, the two communist parties reconciled.

When Abe, a nationalist, became Prime Minister of Japan in 2012, it marked a turning point in the country’s politics. He was known for his strong foreign and defence policies, and he has long campaigned to change Japan’s pacifist post-war constitution.

His nationalist sentiments have regularly sent shockwaves to China, especially after his 2013 visit to Tokyo’s Yasukuni shrine, a contentious site tied to Japan’s militarism before and during WWII. He fought for the right to collective self-defence, which would allow Japan to send troops overseas to protect itself and its allies if they were attacked.

Furthermore, the Japanese people overwhelmingly supported his policies. Beijing’s hegemony in the East and South China Seas, as well as its violations of the human rights of Uighurs and Hong Kong demonstrators, has stoked anti-Chinese sentiment in Japan. The Japanese people have been calling for a strong nationalist strategy to help constrain China. Even Abe’s appeal for the amendment of Article 9, which alludes to the dissolution of the Self-Defense Forces, received widespread support from Japanese residents.

This forced the Japanese Communists to change their stance vis-a-vis China. The JCP’s platform was altered in 2020. A positive reference to China, which claimed that Beijing was “beginning a new search for socialism, including the attempt to build socialism through a market economy, was removed altogether.

In addition, JCP president Kazuo Shii underlined the shift in a tone more openly in a speech announcing the platform amendments, referring to the Chinese Communist Party as “the Chinese party” on several occasions rather than its formal name. “The Chinese party calls itself ‘socialist’ and ‘communist,’ but its great-power chauvinism, hegemonism, and human rights violations have nothing to do with socialism,’ and are unworthy of the name ‘communism,” he added.

The JCP recently urged for the deployment of Self Defense Forces (SDF) in the event of a probable invasion of Japan. This appears to be a clear warning to Beijing to halt its Indo-Pacific expansionist ambitions.

“In the event of an imminent illegitimate invasion, we will employ all means, including the SDF, to preserve the lives of the people and the sovereignty of Japan,” JCP leader Kazuo Shii said.

It’s worth noting that this comes from the same JCP that has advocated for the disintegration of SDF for years. The JCP aimed to build a national consensus in 2004 in order to put in place mechanisms to invoke Article 9 of the Constitution.

You could be perplexed at this sudden change in JCP’s attitude towards their Chinese counterparts. Well, communists in Japan are actually on the verge of annihilation as a political force. The party’s popularity is hovering at 3-5 per cent. Politicians’ thirst for power can sometimes push them down the most heinous pathways; treachery to one’s principles appears to be of little consequence to them. Who better to know this than the Communists?