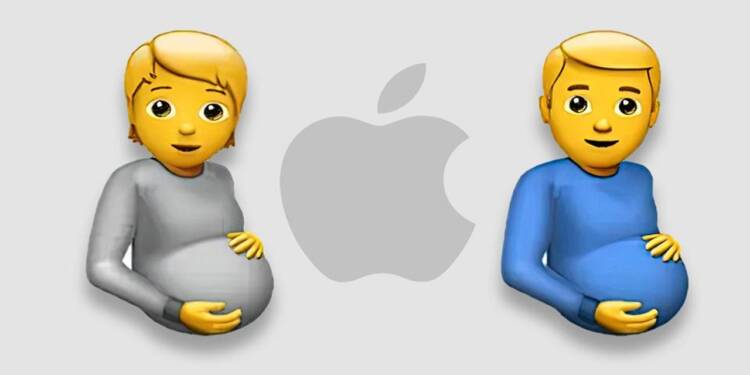 Apart from its innovative market strategies and prominent hardware, Apple will thereupon also be known for its extra-creative, gender-neutral emojis.

After Apple’s gender-neutral assistant update received a lot of attraction in media, the American giant has now released an emoji featuring a man with a bloated belly.

Fox News reported that the emoji actually depicted a “pregnant man,” suggesting gender equality is the core principle of Apple’s renewed emoji campaign. Apple has also rolled out a gender-neutral “person with crown” emoji to go alongside the king and queen cartoons.

NDTV reported that the latest emoticons come more than two years after the company added same-sex couples and gender-neutral emojis in 2019. The decision to release the gender-neutral emoticons was met with criticism and mockery by internet users who cuttingly thanked Apple for introducing a “beer gut” emoji.

Apple’s woke-infested emoji initiative shows how Apple’s tech outreach is going to have grave ramifications for our vulnerable societies in times to come. The woke idea that gender is something “unnatural” and “unjust” is being shoved down the throats of users in the name of promoting gender neutrality and inclusivity.

Some angry netizens opined that the new emoji was absolutely unnecessary and urged Apple to back-peddle on its move. “Why did Apple make a pregnant man emoji? That was seriously unnecessary,” wrote one user.

Why did #Apple make a pregnant man emoji? That was seriously unnecessary.

“You really need to rethink your pregnant man emoji. If this is not removed, I will no longer be using apple products. I have three in my house that I will be happy to trash in a heartbeat. And if you think I am the only one, think again,” another user wrote.

The transgender movement in the US is taking a heavy toll on the well-being of American society and well-being. A recent media report revealed that girls are generally more vulnerable to the gender-transition movement than boys. And this has yielded really disastrous results in some cases.

Yaeli Martinez’s case is one such example. Her school in California wanted to convert her into a boy. She resisted the attempts, so the California State got her temporary custody from a family court judge.

Yaeli was thereafter given testosterone injections and finally, in 2019, she decided to end the ordeal by walking in front of a train. The State organized her obituary where she was referred to as “Andrew”, much to the anguish of her mother, Abigail Martinez.

This shows that the transgender movement and gender-neutral campaign in the US have lost their way and are doing more harm than good to American society. Apple’s proactive contribution in fuelling this woke narrative is sure to aggravate the ongoing gender crisis in America.