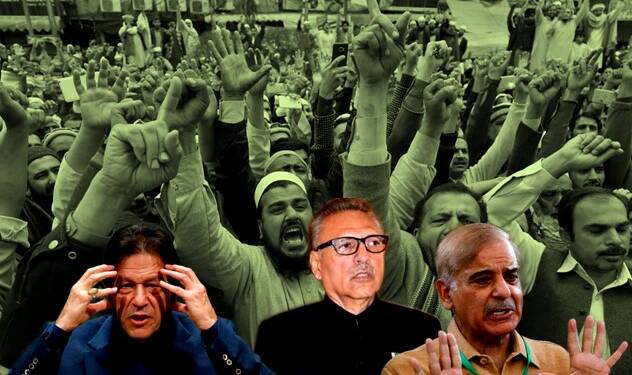 This week, as India appointed Lieutenant General Manoj Naravne as the Chief of Army Staff, a hilarious comment made the rounds on WhatsApp in the subcontinent: Modi appoints his fourth army chief, and Bajwa appoints his fourth Prime Minister. Indeed, the military establishment of Pakistan has spent the week attempting to clean up the political mess that was left behind.

Earlier, the President of the Republic Arif Alvi had expressed discomfort in administering the oath of office to the new cabinet. Alvi of course is an Imran Khan appointee, being a founding member of Imran’s party the PTI. As a result, PM Shehbaz Sharif and the first lot of ministers were sworn in by Sadiq Sanjrani, the chairman of the Senate who was conveniently bestowed the title of ‘acting president’. Obviously, the military establishment would never allow a small-time player like Alvi to put a spanner in their works. Later after some political leaders of the new ruling coalition met each other and discussed the possibility of formally impeaching the president, Alvi’s ‘discomfort’ began to ease, and he administered the oath of office to the second lot of ministers the following day.

Among the ministers who grabbed the limelight was Hina Rabbani Khar, the country’s former foreign minister who has now been reappointed. For reasons that are beyond the scope of this article, a certain class of Indians including eminent personalities in the media and the intelligentsia, have always insisted that she is the most suitable person for India to have a meaningful dialogue with. Indeed, whatever amazing qualities she possesses were instrumental to convince the establishment in the Manmohan era to resume India’s dialogue with Pakistan after they carried out the 2008 Mumbai attacks. At a time when Pakistan’s back is against the wall and they desperately seek some kind of engagement with India, the military establishment has played its (khar)ds well and even received a very enthusiastic response from the same class of Indians. However, this class has no influence on policy making anymore, and the current Indian establishment might require a little more than cosmetic changes to reciprocate. The Modi government seems completely unconcerned with the superficial political changes in Pakistan, continuing to follow its Pakistan policy steadfastly. The latest is a joint public notice from the All India Council for Technical Education and the University Grants Commission , advising Indian students not to pursue their higher education in Pakistan, and stating that educational qualifications obtained in Pakistan will henceforth be ineligible for seeking employment or pursuing higher studies in India.

Another woman who also grabbed the limelight in Pakistan this week was Ilhan Omar, an American Congresswoman of Somali origin who toured Pakistan. Omar is a known Islamist and India-baiter, and therefore although many are asking why this tour took place, the real question is what took so long. Predictably, Omar visited Pakistan Occupied Kashmir and claimed that India was violating human rights. She also diligently paid Imran Khan a visit and clicked pictures with him, to perpetuate the idea that Pakistan was a flourishing democracy. Imran, oblivious to the optics, readily complied. The American establishment meanwhile washed its hands off Omar’s visit, with the Biden administration and other worthies claiming that it was conducted in her personal capacity. Whether the Americans were testing the waters and decided to fold after India’s reaction, or whether it was indeed conducted in personal capacity and further distanced Pakistan from the United States is anybody’s guess, but the visit has certainly backfired.

Imran Khan meanwhile continues to be on his anti-establishment trip. The military establishment seems to have given the Pakistani media clear directions not to cover or propagate Imran’s narrative in any way, sending show cause notices to pro-Imran media outlets. This has forced Imran to conduct a Twitter space to reach out to the world, and repeat the points that he has been making ever since the operation to overthrow him began. Sections of the Pakistani media have compared his rise to that of Hitler and focussed on Imran having sold off the gifts that he received from foreign dignitaries as Prime Minister, reporting that the new government was considering to bring charges against Khan in this regard. Khan has brazened it out, saying that the gifts were made to him and it was his choice whether to keep them or not. Although his open rebellion against the military establishment will probably lose steam, what is remarkable is that the military establishment has been unable to shut him up as yet. Although it is his stupidity and stubbornness that drive him, it will be truly remarkable if he manages to shake things up at the military establishment’s very foundation.

The military establishment was hit once again this week by the Pakistani Taliban, its own Frankenstein’s monster. Known as the Tehrik-i-Taliban Pakistan or TTP, the organization launched a slew of attacks against the Pakistani military this week. Among them was an ambush attack which killed two Pakistani soldiers and injured many others. Rocket launchers were also used on Pakistani military checkposts, and the organization managed to kill three more Pakistani soldiers during a raid that the Pakistani military conducted on a TTP safehouse. TTP meanwhile claims that it has conducted laser attacks as well which have claimed lives, and the Pakistani media has confirmed that 3G and 4G services have been suspended in the South Waziristan district, perhaps to conceal certain ground realities. The same organization has claimed to have killed seven more soldiers in a separate attack, although at this point, it is difficult to tally the various versions coming out of the district. Another organization which calls itself the Islamic State Wilayah Pakistan has also claimed to have assassinated a Christian person in Rawalpindi. On the Balochistan front, both the Balochistan Liberation Army (BLA) and the Balochistan Liberation Front (BLF) conducted attacks on the Pakistani military this week. A vehicle-borne IED (VEID) attack was conducted by the BLA on a convoy of Pakistani security forces in Turbat, while the Iran-based BLF killed a major rank officer in Awaran. It remains to be seen whether the military establishment will fare any better in the coming weeks, once the circus in Islamabad settles down.

Watch this space for more.