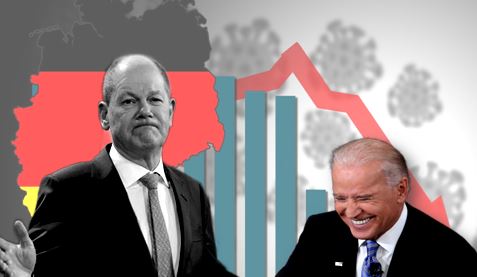 Germany’s condition is deteriorating day by day. Olaf Scholz, the German Chancellor, has now decided to revise the German Energy Security Act, 1975. With this, the German government will be able to take over fuel reservoirs and stations from businesses if fuel shortages create tensions in the area.

Germany appears to be almost assured of its fate since the fuel reservoirs have hit their lowest point. Olaf is now attempting every trick possible to undo the havoc created by his recent acts in the aftermath of the Russia-Ukraine conflict.

Before the war, Russia accounted for 55 % of Germany’s gas needs. Nearly 1/3rd of it was used for industrial purposes such as the production of steel and chemicals. However, blaming Olaf alone for a situation that could have been averted is absurd. The truth is that he was pushed by the EU and, more than likely, due to American pressure. Joe Biden purposefully chose Germany as a pawn to put it on suicide trial.

Germany, a pawn of the US and its Fall

Saying Germany is a pawn of the US has a reason. The nation is still a legitimate spokesman for the USA. It has become a hotbed of military exercises and talks midst of the Ukraine war. The country complied with all of the United States’ requests.

Germany was one of the most powerful economies in Europe. But, now the tables have turned, according to the Bundesbank, the economy is on the verge of a recession. The only reason is that it sanctioned Russian oil and fuel. Furthermore, Germany decided to scrap its own profitable Nord-Stream 2 pipeline. These are some of the blunderous decisions that have caused Germany to suffer.

Germany also faces the threat that, if EU pressure intensifies, Russia would unilaterally cut off gas supplies to Europe in response to western sanctions leading to the german economy being completely paralyzed. However, a late realization has pushed Olaf Scholz into conscience but, he’s late.

Russia and Ukraine are in a direct military conflict. But, you’ll see, the actual conflict is between the United States and Russia. Since the beginning, the United States has been urging the world to help Ukraine and sideline Russia. Germany, like its European allies, fell into Joe Biden’s trap and went all-in against Russia, punishing it without considering its consequences.

Read More: Germany’s support for Ukraine pushes the country to the brink of a civil war

A New Economic Power in Europe

Germany is tense not simply because it is in recession or because of a fuel shortage. Another point of concern for Germany is the possibility that as a result of its decline in Europe a new power can rise and France is the most popular candidate.

Since Emmanuel Macron’s re-election, France’s status has already risen. Olaf’s recent actions in defying EU sanctions are already having an impact. The French military is the most powerful in the bloc. Germany had been Europe’s most powerful economic power until recently. However, as the war unfolded, Germany’s dominance began to wane and Europe started to look for a swift change in its preferences.

Read More: France is all set to become the EU’s only superpower and Germany is already pissed off

Olaf Scholz is on his way to becoming Germany’s worst chancellor. Seriously, under his reign, Germany’s capacities and strengths fell shattered. Thank you Joe Biden for making this possible. You persuaded Germany that the battle is between Russia and Ukraine and as a result, Berlin is losing everything it had for years.