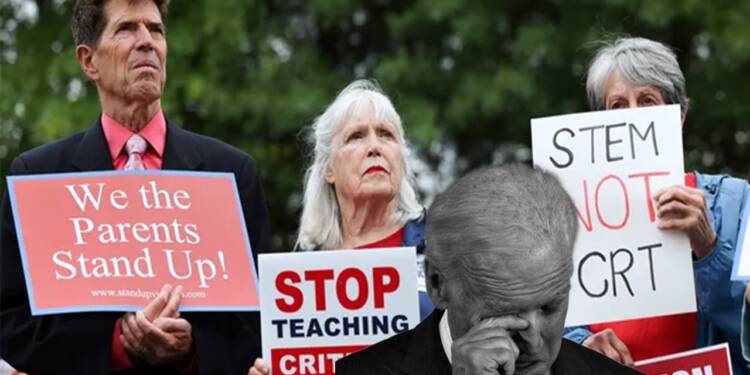 Joe Biden is on a mission. He wants to turn children against their parents. That is, in essence, what the radical left desperately wants to effectuate in the United States. In recent times, parents have risen together as a strong bloc against the radical-left agenda being pushed forward in the name of education by American schools. By drawing a rift between children and parents, liberals want to break the traditional family structures of the United States. They aim to create rebels out of small kids, turning them into reverse racists that look at all Whites with absolute disgust.

And guess who just decided to add fuel to fire, waging an entire campaign to demonize parents? Mr. Joe Biden!

That’s right – the President of the United States has made it clear that he wants to create a liberal, if not a radical leftist out of every American child.

At the 2022 ‘Teacher of the Year’ ceremony hosted by the White House on Wednesday, President Biden claimed that school children don’t belong to parents “when they’re in the classroom.” He added, “They’re all our children. And the reason you’re the teacher of the year is that you recognize that. They’re not somebody else’s children. They’re like yours when they’re in the classroom.”’

At the function meant to celebrate teachers, Joe Biden couldn’t help but attack Republicans. He said, “There are too many politicians trying to score political points trying to ban books, even math books. Did you ever think when you’d be teaching, you’re going to be worried about book burnings and banning books all because it doesn’t fit somebody’s political agenda?”

Speaking of teachers, Biden added, “We have got to stop making them the target of the culture wars.”

But Who’s Waging the ‘Culture Wars’?

Anybody who is aware of what is happening around them will agree with the fact that radical leftists and liberals, acting at the behest of the Democratic party, are waging a war against American culture. Liberals are pushing for dogmatic nonsense to be imparted as ‘education’ to children.

This includes telling kids that if they are White, they are part of a societal problem in the United States and that even if they are not guilty of racism, they must feel sorry for what has happened in the past and own up to the responsibility. Additionally, they must be sensitive enough to give up their rights to make way for those that have been persecuted in the past.

Essentially, subjects like the critical race theory are what parents are challenging. They are telling schools in no uncertain terms that racial fiction cannot be passed off as education to children. To top it all, unscientific gender studies and sex education is being taught to children as a new science, when in fact, it is all pseudo-science. Again, parents are speaking up against these issues as well.

Now that acts as an impediment to Joe Biden’s agenda of turning every American child into a prospective Democrat voter. So, Biden is now working to turn every child against his/her parents. This begins by telling children that when they are in the classroom, their parents have no control over them.

Consider this, if your children were to do something bad while in class, you would not be able to say anything to them. Why? Because Joe Biden just declared that classrooms are out of bounds for parents.