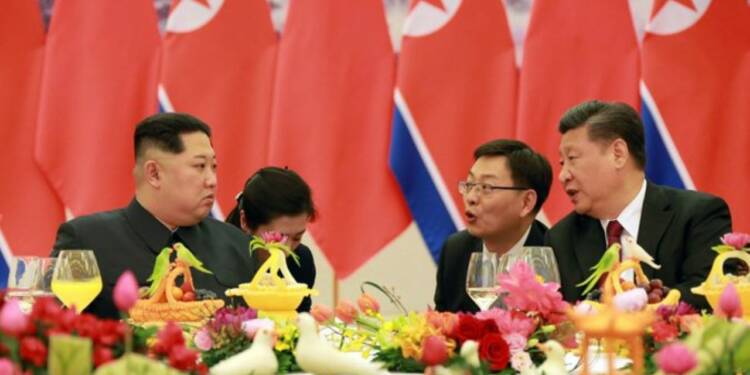 And that is exactly what has happened now. North Korea is livid. The country’s leader Kim Jong-un recently issued a nuclear warning to an unnamed nation; because one nation has really pissed the North Korean economy off. That one nation is none other than China.

On Monday, China suspended its railroad freight traffic with North Korea as it reels under a massive surge of corona infections. Chinese Foreign Ministry spokesperson Zhao Lijian yesterday clarified that the pandemic situation in China’s Dandong region left China with no other option than to close the borders with North Korea abruptly.

The Chinese official didn’t mention other details, made no reference to links with North Korea and didn’t disclose when the restrictions will be lifted.

Within 24 hours, the world woke up to an excruciating nuclear threat from North Korea. On April 30, North Korean leader Kim Jong-un warned that Pyongyang could “pre-emptively” use its nuclear weaponry to counter hostile forces. North Korean media reported that Kim told top military officers that to “maintain the absolute superiority” of North Korea’s armed forces, the country should be able to “pre-emptively and thoroughly contain and frustrate all dangerous attempts and threatening moves… if necessary.”

Pyongyang should continue to build up its arsenal so that it can have the “overwhelming military muscle that no force in the world can provoke”, Kim said, calling it the “lifeline guaranteeing the security of our country”.

Now, this statement by Kim Jong-un is really intriguing for many reasons. First, it came just a day after China’s abrupt decision of halting its trade ties with North Korea. Second, it was ‘unnecessarily’ ambiguous.

A lot of old-fashioned experts on the internet are linking this statement of Kim to North Korea’s long-held animosity toward the South; however, Kim doesn’t have to don a diplomatic cloak for issuing a nuclear warning to its southern rival. So, Kim’s statement was deliberately packed in an ambiguous tone, to give a subtle yet powerful message to North Korea’s giant neighbour.

So, was this missile threat actually meant for China? The answer is yes. But, why would foul-weather friends like North Korea and China ever engage militarily in this hostile manner? The answer is the existential threat looming larger over the North Korean economy. Borders between North Korea and China were opened only in January this year after a two-year-long pause. During this period, the North Korean economy endured extreme duress and the country faced heavy food shortages.

Now, with China closing down its borders with North Korea, the country again stands the risk of facing acute food shortages once more. North Korea is already in shambles, and this new trade embargo engineered by China could really take a heavy toll upon the legitimacy of the Kim administration.

The two years after the pandemic have remained extremely stressful for North Korea and the sufferings of its people have only gotten amplified. For now, the only way for the Kim administration to resuscitate the country’s economy is to boost its trade ties with China. And now this embargo imposed by China has effectively crashed all of North Korea’s dreams of reviving its economy.

These emerging anti-China sentiments in North Korea correspond to the rise of anti-India sentiments in the South Asian nation of Nepal when India staged an economic blockade of the tiny nation back in 2015. New Delhi was reportedly not happy with Nepal’s new constitution. The Modi administration then tried to persuade the Nepalese government to make necessary changes to the constitution by imposing an economic blockade, which gave a rise to the anti-India sentiments in Nepal in epic proportions. The same appears to be happening in North Korea this time, as its biggest neighbour throttles its economy by staging a blockade.